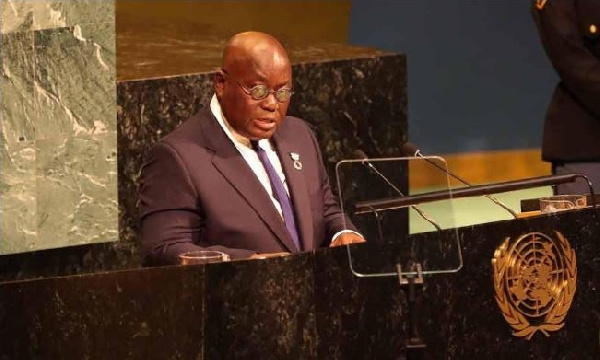 President Nana Addo Dankwa Akufo-Addo has assured the United Nations of a transparent, free, fair, safe and credible elections in Ghana in December.

“At the end of the elections, we shall be proud of ourselves, Africa will have good cause to be proud of us, and the rest of the world will find lessons to learn from us,” Nana Akufo-Addo said on Wednesday, 23 September 2020 in a recorded video delivered at the 75th session of the UN General Assembly at the UN headquarters, New York, United States.

This was the first time in the history of the United Nations that each member state, observer state, and the European Union, was invited to submit a pre-recorded video, delivered by its designated high-level official.

Nana Akufo-Addo also touched on the effect of COVID-19 pandemic on the lives of everyone and the benefits of technology in these difficult times; the need for restructuring of the global financing architecture, to enable access to fresh capital by developing nations and; a call to reform the world body to reflect Africa’s common position on UN reform, as set out in the Ezulwini Consensus.

On the political situation in the sub-region, Nana Akufo-Addo noted that: “It is incumbent on the UN and, indeed, all Member States to lend their support to the efforts being made by ECOWAS to restore normalcy to Mali, and help us defeat the scourge of terrorism.”

The Ghanaian leader further reflected on the 400th-anniversary of the transatlantic slave trade in 2019, at which time Ghana played a significant role by welcoming hundreds of Africans in the diaspora to their root.

He said Ghana has every intention to open its doors to members of the African diaspora who find Ghana a safe haven.

The President’s assurance to the UN came a few days after former President John Mahama said Ghana’s Electoral Commission’s ongoing voter roll exhibition exercise has been fraught with “so much disorder, anarchy and chaos”, adding that the election management body has exhibited “legendary incompetence” with the entire electoral process ahead of the 7 December 2020 and, thus, called on the international community and election observers to step in.

The flagbearer of the biggest opposition party, the National Democratic Congress (NDC), told party supporters in the Bono Region on Tuesday, 22 September 2020 that since the EC started the voter register exhibition, “many have gone to check and in many places, there are anomalies, several anomalies that our party has detected”.

“We want electoral observers to come long in advance; international election observers must be deployed long in advance to supervise the electoral process going into the election. We will make a major statement on this matter in due course, very soon”, he said, adding: “But in the meantime, I’ll suspend the campaign in the Bono Region, there are several constituencies that were expecting us today and tomorrow and the day after. I wish to apologise to them. As soon as this matter is addressed in Accra, I’ll quickly come back and finish the tour of the Bono Region”.