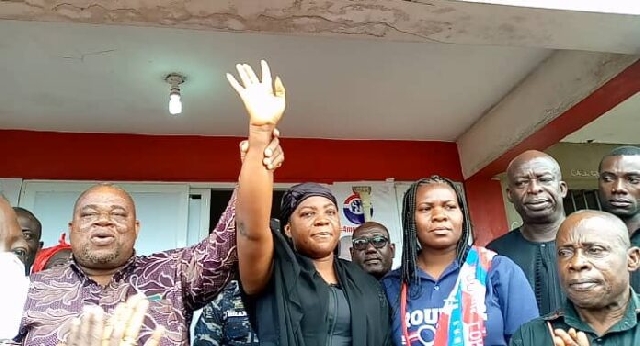 Mrs Ophelia Hayford has filed her parliamentary nomination with the Electoral Commission to enable her run in the 7 December 2020 polls in her late husband’s stead.

Mr Ekow Hayford, who was the incumbent MP for Mfantseman before armed robbers killed him on 9 October, was also the governing New Patriotic Party’s parliamentary candidate for 2020.

Addressing the media after the filing her nomination, Mrs Hayford said: “I promise to work hard to ensure that the NPP wins the seat and honour the memory of my late husband and continue with his developmental agenda for Mfantseman”.

“I will ensure that all my husband’s unfinished business in the constituency is completed when I win”, she added.

With her to file her papers were the NPP’s Chairman for Mfantseman, Alhaji Jibril Adam; Central Regional Secretary Takyi Mensah, Regional Organiser Pessy Dennis, the Regional Woman Organiser and some constituency executives.

Meanwhile, the police has arrested five suspected in connection with the MP’s murder.

The suspects, according to the police, have been taken through the lawful procedure.

His family held a one-week memorial service in his honour in the constituency on Thursday, 15 September 2020.

Mr Hayford was shot dead on the Abeadze Dominase-Abeadze Duadzi-Mankessim road at dawn as he returned from a campaign trip at Dominase to his residence at Mankessim.

Meanwhile, his second wife, Sarah Hayford, has said she had no idea the MP was married to another woman until three years into her matrimony with the lawmaker.

The revelation followed reports that Ophelia Hayford had been tipped as his successor to the Mfantseman seat.

The second wife disclosed that she got married to the MP at a public ceremony on 8 June 2013 and were living together at Tarkwa until his death.

Speaking in an interview with Accra-based Kasapa FM, the second wife explained: “At the time Ophelia called me, I had been married to Ekow for the past three years and living with him at Tarkwa. Feeling very shocked, I called my husband and asked him who Ophelia was? He told me to ignore her whenever she calls me and I told him he needed to explain things to me because the woman keeps sending me text messages”.

“It emerged that he had not officially divorced his first wife, as he had indicated but he couldn’t tell me the truth; the reason why I agreed to marry him.

“I asked what was the way forward and my late husband told me that he’ll sort out the issue and, so, I was waiting for his action.

“But since then, I never heard from anyone including his first wife. I’ve been staying with him at Tarkwa and he visits his mother occasionally on weekends – being the only child.”

She further disclosed that the family of the late MP are aware that he was married to two women.

“When the matter came up, I went to see his mother for a discussion and she told, and has married me as well. All the family members know and accept that Ekow has two wives and, so, I shouldn’t be worried. This is what his mother told me.”

It emerged that he had two wives.

The latter, Lydia Seyram Alhassan, later succeeded him as the MP for the area.

The First Vice-Chair of the NPP in the Mfantseman Constituency, Yaw Berchie Nuako, has however disclosed that a replacement for the deceased MP will be announced on Thursday, 15 October 2020.