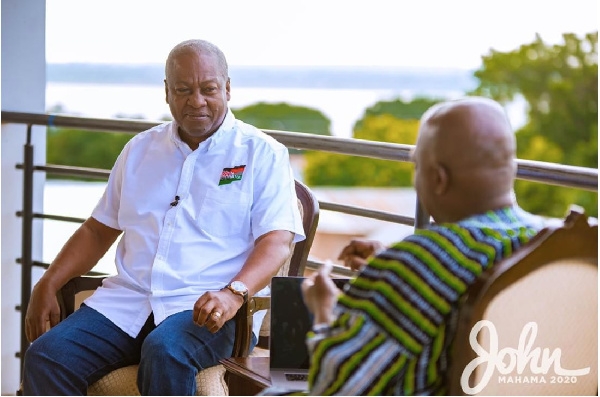 The flagbearer of the main opposition National Democratic Congress (NDC), Mr John Dramani Mahama, has expressed confidence the biggest opposition party will win the majority of seats in the Bono region in the crucial December polls.

According to Mr Mahama, the NDC will shock the governing New Patriotic Party (NPP) which assumes the Bono region is its stronghold.

Speaking in an interview to wrap up his three-day campaign tour of the region on Thursday, 1 October 2020, the former president expressed satisfaction with the welcome he got from the people.

According to him, Ghanaians are disappointed with the Akufo-Addo-led government and are prepared to make a change on December 7.

“Bono and Ahafo used to be one region and it is considered one of the swing regions of this country. NPP has won it, we have won it several times, so, there’s no need to be complacent with this region.

“After they divided it, most of the seats that we have are in the Bono-East [region] and, of course, we have one seat here in Bono.

“But it appears the NPP is getting very complacent; they just assume that it is their stronghold so they are going to win it.

“They’re going to come in for a very big surprise; we are going to pick up several seats here in Bono,” Mr Mahama stated.

Touching on the response from the residents of Bono, Mr Mahama stressed: “The response has been very good and like I said the NPP has become very complacent. They just assume that the place is their stronghold and they are going to win it but things are changing, people are frustrated with their time in governance, people cannot realise their potential…

“When they announced I was coming to Berekum, the kind of reception we got in Berekum was much bigger than we’ve ever had in all the elections that I have participated in and I can see that something is changing …we’ve been to most of the constituencies and the main litany that runs through is disappointment. People are disappointed with the four years of NPP administration and they are prepared to make a change”.