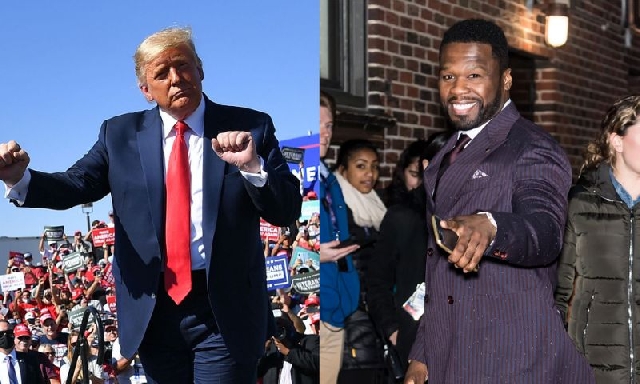 President Donald Trump isn’t a fan of Hollywood elites, but it appears he might have another celebrity in his corner. 50 Cent has seemingly endorsed the president ahead of the Nov. 3 election, telling his 26 million followers to “vote for Trump.” The 45-year-old rapper took to Instagram on Monday after seeing Democratic nominee Joe Biden’s proposed tax plan.

In New York, where the entrepreneur lives, taxpayers earning more than $400,000 a year could face combined federal and state tax rates of 62 percent under Biden’s plan, according to experts.

Although 50 Cent is a notorious troll on social media, he hasn’t made any indication that he’s joking. In a second post on Monday afternoon, the rapper instead poked fun at his financial situation.

“I just remembered I’m bankrupt, so I’m looking for a gracious loan can anyone help a brother out,” he added.

“Businesspeople will do that in a heartbeat before losing money. Because it means they have the ability to be secure and invest again,” the rapper explained.

In that same May 2020 interview, 50 Cent noted he had sympathy for how the president handled the coronavirus pandemic.

“It’s an awkward situation. If you respond too fast, you’re wrong, because everyone would be kicking and screaming and saying you shut everything down. But if you shut it down late, you’re wrong. So you can’t win in that situation,” he shared.

50 Cent added, “People hate him or love him. There’s no in-between. And for me, I’m looking at it and going: ‘That’s the exact position I’m in.’”