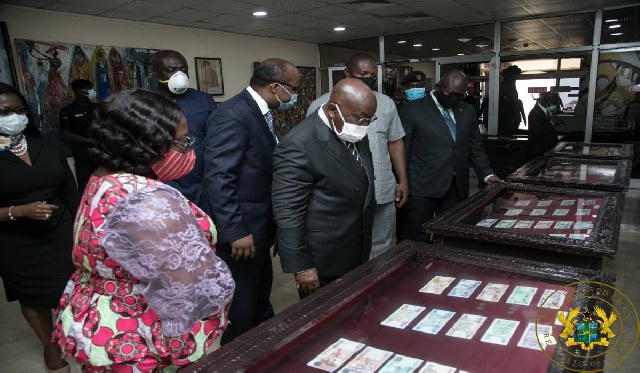 The Governor of the Bank of Ghana, Dr Ernest Addison, has stated that all customers of the nine (9) failed banks, and over ninety-five per cent (95%) of customers of Specialised Deposit-taking Institutions (SDIs), which were affected by the banking sector clean-up, have received their deposits.

The Governor continued, “So, there are just about 5% depositors who have large amounts, these are the high net worth individuals that were settled with loans which were to be retired over 5 years. So, we think that most of it has been done.”

Dr Ernest Addison made this known on Tuesday, 25 August 2020, when the President of the Republic, Nana Addo Dankwa Akufo-Addo, visited the Bank of Ghana to familiarize himself with the operations of the Bank.

“The Government has provided a bond worth GHS1.7 billion, for which we have monetised GHS700 million. So, the receiver is also working at clearing the last few customers that are left in that segment. So, I think that we have made a lot of progress, Mr President, with this depositor issue,” he added.

On helping to ensure the maintenance of a strong banking sector in the country, and to prevent the recurrence of a banking crisis, Governor Addison told President Akufo-Addo that the first step taken has been to pass the new corporate governance directive.

This, he said, had become necessary because, at the heart of the financial sector crisis, was a breakdown in corporate governance in the various banks whose licenses were revoked.

“The second one has to do with misreporting of data, because of a lot of falsification of data by the financial institutions to the Central Bank. So we have brought in a new technology which will allow us to get the data directly from sources, so that no human interventions will be in there to distort the data that they send,” the Governor indicated.

The third step, he added, “has to do with the capital verification process, because a lot of the banks reported that they had capital when, in fact, they didn’t have any capital at all.”

He continued, “So we have reviewed the entire capital verification process of the bank, and it’s almost impossible now for us to have a bank that doesn’t have any capital, and yet it’s allowed to operate, and, of course, in addition to that, for all the staff of the banking solution department we have had a lot of training programmes with the IMF and other technical assistance have been provided.”

To President Akufo-Addo, Governor Addison expressed the appreciation of the country’s banking sector for the role played in sanitiSing the space, which has brought in its wake more confidence in its wake.

“Your clear leadership and understanding of the role of the financial sector in the government’s transformation agenda, gave the leadership of the Bank the confidence and courage to embark on the comprehensive banking sector reforms over the last three years, which saw an increase in the minimum capital requirements, clean-up of the financial sector by the revocation of licenses of weak and insolvent institutions, and a revamp of the regulatory framework to stabilise and strengthen the sector,” he added.

The clean-up of sector, he stressed, has resulted in a stable financial sector with fewer banks and Specialised Deposit-Taking Institutions (SDIs) that are well capitalised, liquid, and solvent, and better able to support our nation’s economic growth agenda.

“These efforts helped to earn the Bank international acclaim as the Central Bank of the Year in 2019. By the end of 2019, all the financial sector soundness indicators showed strong improvements as capital adequacy ratio, profitability, and liquidity levels increased significantly while non-performing loans declined,” he added.