A/R: Akufo-Addo’s ‘Year of Roads’ a scam – Drivers, as cars including ex-TOR MD’s get stuck on muddy stretch 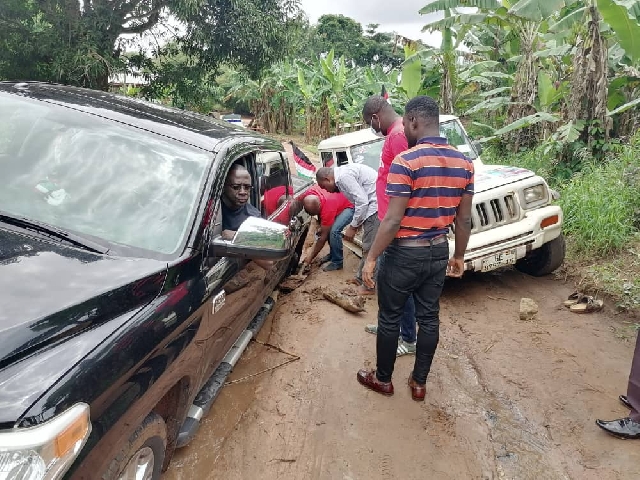 There seem to be some growing concerns among drivers, both commercial and private, who ply the Kumawu road about the poor nature of roads.

One of such people is the former Managing Director of Bulk Oil Storage and Transport(BOST) and Tema Oil Refinery(TOR), Kwame Awuah-Darko who used the road in recent times.

He expressed shock over the poor nature of the roads when his vehicle got stuck in the mud for hours, and called on government to as a matter of urgency fix those roads to ease burden on commuters and residents in the area.

Meanwhile, some disgruntled drivers of Kumawu on Thursday almost embarked on what would have been a demonstration against bad roads in the District.

The drivers expressed worry over the nature of roads in the area which, according to them, has been a challenge over the years.

According to the drivers, road projects in the Kumawu District has suffered major setbacks.

The drivers who spoke with media off record say, the poor nature of roads has resulted in frequent breakdown of vehicles and difficulty in transporting residents and foodstuffs to the market, among others.

They described the initiative as a scam and blamed Member of Parliament (MP) for the area, Mr Philip Basoah for not addressing their plight.

They said:“Let the Akufo-Addo-led government be reminded that Kumawu is also in the Ashanti region but we haven’t had a feel of his year of roads – not a kilometer has been constructed. Basoah was Assembly member for years before he was elected MP, he’s aware of all these challenges, yet not making any efforts to address them.”

“Where are the roads government keeps making noise about?”, they queried.

Meanwhile, government through the Minister of Roads and Highways, Mr Amoako Attah, says 500 kilometres of new road projects will be completed in the Ashanti region by December this year, in line with its Year of Roads initiative declared by President Akufo-Addo last year.

He noted that already, 460 kilometres of the new road projects under construction in the region are scheduled for completion and were expected to be handed over by September this year.