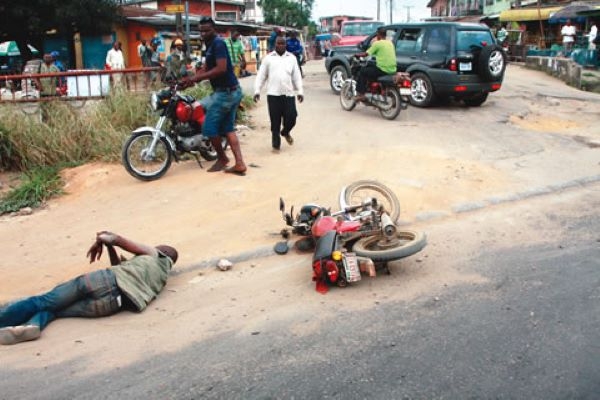 An accident involving a motorcycle and a cargo vehicle on Wednesday, 21 October 2020, claimed the lives of two persons on the Abrepo-Barekese road in the Kumasi Metropolis of the Ashanti Region.

According to eyewitnesses, the cargo truck was making a U-turn on the intersection close to the Samad Hotel at Abrepo when the motorbike, which was heading toward Bantama slammed into it.

Narrating the incident, one eyewitness told Class91.3FM’s Ashanti regional correspondent Elisha Adarkwah that: “The cargo truck was making a U-turn in the middle and the motor was also from the girls’ school en route to town and, so, he was speeding and he couldn’t control the speed, so, he hit the driver’s side and threw them off.

“Instantly, the rider died, but the pillion passenger was still breathing but I can’t tell if he’s alive or not since they took him away.

“As for the other one, his helmet got broken and it affected his head as well, so, blood was oozing from his head, so, he died here.

The second victim, however, died at the hospital.

The bodies of the victims have been deposited at the Komfo Anokye Teaching Hospital (KATH).