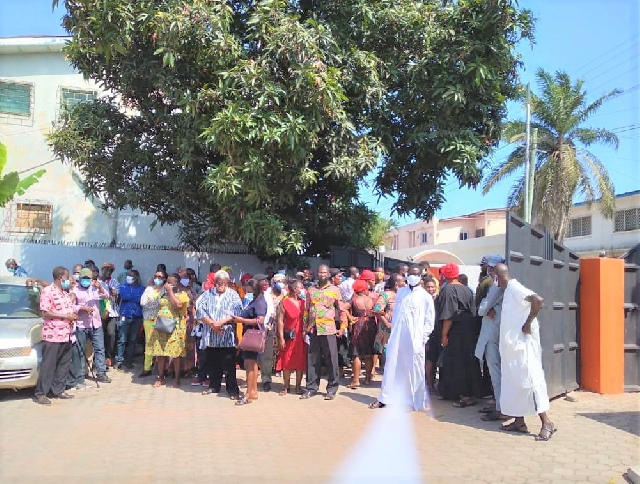 Aggrieved customers of Blackshield Company Limited, formerly Gold Coast Management Fund (GCMF), have petitioned the Class Media Group to help them reach out to President Nana Addo Dankwa Akufo-Addo to add them to the list of people who are to benefit from a bailout package earmarked for those whose funds got locked up as a result of the banking sector clean-up exercise.

According to the group, their funds have been locked-up with the fund management firm since June 2018, adding: “All efforts made by this group to get the government to help in returning our funds have proven unsuccessful.”

The group presented a petition to the management of Class Media Group (CMG) on Thursday, 22 October 2020.

One of the members, Benjamin Adokpo, who read the petition on the group’s behalf, said: “The investment we did with GCMF was legal and well-regulated by state regulatory agency, i.e. the Securities and Exchange Commission (SEC) headed by Rev Ogbarmey Tetteh, which is an extension of the Finance Ministry and, therefore, it is highly unfair for the government to sit unconcerned while we wallow in abject poverty and deprivation due to our locked-up funds.

“We are, by this petition, pleading with your highly-esteemed media institution to intervene on behalf of the poor Ghanaian citizens who are dying due to this situation,” he added.

Mr Adokpo continued: “We wish to use your medium to plead with the government of the day to solve all the court processes with GCMF on purely humanitarian basis and proceed to use the 3.1 billion bailout package as announced by His Excellency President Nana Addo Dankwh Akufo-Addo in September 2020, to help relieve Gold Coast Fund Management of their pain and hardship, as it has been done for our other colleagues with 22 fund management companies who are currently being paid by the government from the 3.1 billion government bailout package”.

“We’re a group of over 100,000 aggrieved customers of Gold Coast Management Fund (GCMF). GCMF is owned by Papa Kwesi Nduom. Our funds have been locked up with the fund management firm since June 2018. All efforts made by this group to get government to help in returning our funds have proven unsuccessful”.

The group further pleaded with President Akufo-Addo to reconsider their exemption from the bailout packages because “our counterparts in the banking sector have been paid despite some of these banks and savings and loans institutions being in court with the government.”

Mr Adokpo said that as a result of their locked-up funds, many of them are faced with various economic hardships.

“Over 100 members of this group have passed away, as they faced several financial and economic challenges, including their inability to finance their medical bills, resulting in their death.

“The majority of us are persons with disability, pensioners, the aged and mostly vulnerable persons in the Ghanaian society who invested our funds with the fund management firm with the hope of securing a better future for ourselves and our families. This hope, however, has been dashed, following the financial sector clean-up exercise initiated by the Akufo-Addo-led government,” he noted.

The General Manager of Accra100.5FM, Mr Kojo Preko Dankwa, who received the petition on behalf of CMG, indicated that the grievances of the aggrieved customers will be rehashed through the Group’s various outlets to help fast-track feedback.