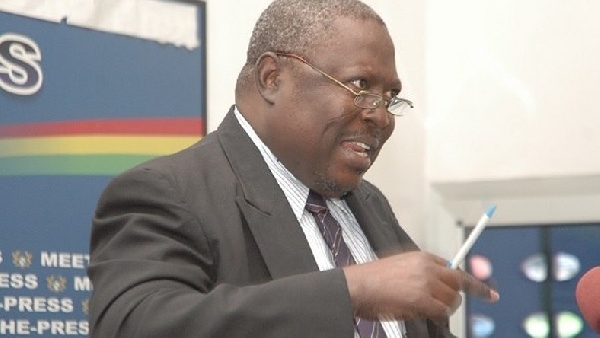 In an interview with Accra-based Citi FM, Mr Amidu said: “We wanted them to give us all the payments made through approved banking channels to show us how much has gone into the transaction so that once and for all, we can make an assessment based upon the quantum of money being paid.”

However, Mr Amidu said Mr Adu Boahen has been delaying the process.

“That’s why we are telling him [Adu Boahen]: ‘Give us the evidence for the quantum you have paid [that] is not substantial’. I haven’t had a reply and that is the only thing holding the assessment report”, Mr Amidu said.

“The holding up of the assessment report is not from this office because we intended it to be out by the end of September”, he revealed.

“The stonewalling” and “the delays”, the anti-graft campaigner noted, “have come from the Ministry of Finance, particularly the Deputy Minister of Finance, Adu Boahen”.

“He’s the one who has held us up and, unfortunately, we are in October, which is not what we intended”, he noted.

The government of Ghana, a few days ago, froze the launch of the Initial Public Offering (IPO) by Agyapa Royalties pending the completion of a corruption risk assessment.

A letter signed by Mr Adu Boahen, and addressed to the OSP, said: “The Ministry does not intend to proceed with the IPO ahead of the results of the corruption risk assessment by your Office”.

The ministry said: “The international investor community has been closely monitoring the outcome of the current state of the transaction, and, it would, therefore, be detrimental to proceed without receiving the necessary approvals and green light from your Office,” it said.

“Additionally, we will be required to fully disclose in the prospectus to the transaction, the outcome of any investigation by your office prior to approval by the respective regulators of stock exchanges in Ghana and the United Kingdom”, the letter to the OSP said.

The letter said the ministry is ever ready to “provide any further information or clarification” to the OSP on the deal.

According to Mr Amidu, the ball is now in the court of the Ministry of Finance, as far as the progress of the assessment is concerned, noting: “That is why they have to expedite our request so we have this thing done”.

He indicated that: “It’s not in our interest [to keep it on hold]”.

“We are not doing an investigation. We are not a Commission of Inquiry. We are not prosecuting. We are only performing our anti-corruption, prevention risk assessment.

“It is for both prevention and corruption. That’s what we are doing.

“It has consequences, of course, because it demonstrates whether the transaction lowers or raises the bar.

“Everything depends on the Ministry of Finance”, Mr Amidu noted, revealing that: “The last time I sent them a reminder was the 7th of October” and “well, nothing has come”.

The Ministry put the IPO launch on hold following a letter Mr Amidu wrote to them in that regard.

Mr Amidu, in a letter to the ministry, said there were some outstanding documents which had not been provided to him by the Finance Ministry concerning the IPO, even though some other documents had been made available to him upon request.

“The information and documents you supplied concerned mainly the processes for and the appointment of the Transaction Advisors, which goes to the root of any corruption risk assessment”, parts of the letter said.

The Parliament of Ghana was billed to provide Mr Amidu with all the documents covering the deal as of Monday, 14 September 2020.

Amidst the controversy surrounding the deal, the Alliance of CSOs Working on Extractive, Anti-Corruption and Good Governance called for the suspension of the deal pending further dialogue on some critical issues concerning the mineral royalties monetisation agreement.