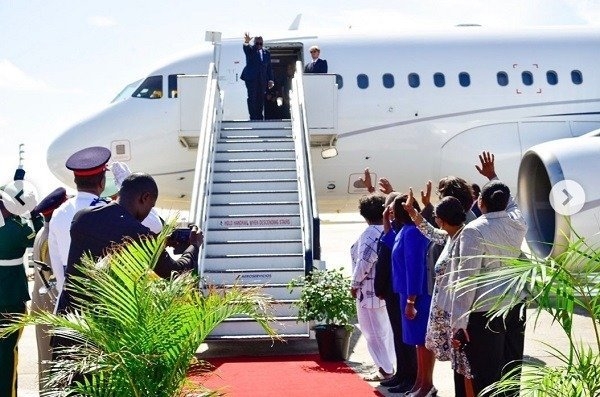 President Nana Addo Dankwa Akufo-Addo left Ghana today Monday, 7 September 2020, to lead the Ghanaian delegation to the 57th Ordinary Session of the Authority of ECOWAS Heads of State and Government, which is being held in Niamey, capital of the Republic of Niger.

The meeting of the Heads of State will discuss matters the COVID-19 situation in West Africa, the ECOWAS Single Currency Programme, and the political impasse in Mali.

President Akufo-Addo was accompanied by the Minister of Foreign Affairs Shirley Ayorkor Botchway, Minister of Finance Ken Ofori-Atta, Governor of the Bank of Ghana Dr Ernest Addison, and officials of the Presidency and the Foreign Ministry.

The President will return to Ghana on Monday, 7th September 2020.

In his absence, Vice President Alhaji Dr Mahamudu Bawumia, shall, in accordance with Article 60(8) of the Constitution, act as President.

So far, 47 African countries have been affected by the COVID-19 pandemic.

Meanwhile, 22,883 people have died of the disease in Africa.

In late December 2019, Ghana’s presidency said the country would “soon” join eight West African countries who have adopted the ECO as legal tender.

A statement signed by Mr Eugene Arhin, Director of Communication at the Jubilee House, said: “The government of Ghana has taken notice of the recent declaration made on Saturday, 21 December 2019 by the President of the West African Economic and Monetary Union (UEMOA), His Excellency Allassane Ouattara, the President of the Republic of Cote d’Ivoire on the decision taken by the eight West African member states of UEMOA to discontinue the use of the CFA Franc, in favour of the proposed new common currency of ECOWAS, the ECO, beginning 2020”.

“This is a welcome decision, which Ghana warmly applauds,” the statement dated Saturday, 28 December 2019 said.

It added: “It is a good testimony to the importance that is being attached not only to the establishment of a monetary union, but also to the larger agenda of West African integration”, noting: “We, in Ghana, are determined to do whatever we can, to enable us to join the member stats of UEMOA, soon, in the use of the ECO, as, we believe, it will help remove trade and monetary barriers, reduce transaction costs, boost economic activity, and raise the living standards of our people”.

The statement said: “Ghana urges the other member states of ECOWAS to work rapidly toward implementing the decisions of the Authorities of ECOWAS, including adopting a flexible exchange rate regime, instituting a federal system for the ECOWAS central bank, and other related agreed convergence criteria, to ensure that we achieve the single currency objectives of ECOWAS, as soon as possible, for all member states.”

Mr Outtara made the declaration of the adoption of the ECO at a news conference with French President Emmanuel Macron in Cote d’Ivoire last year.

The ECO was the proposed name for the common currency that the West African Monetary Zone (WAMZ) planned to introduce in the framework of the Economic Community of West African States.