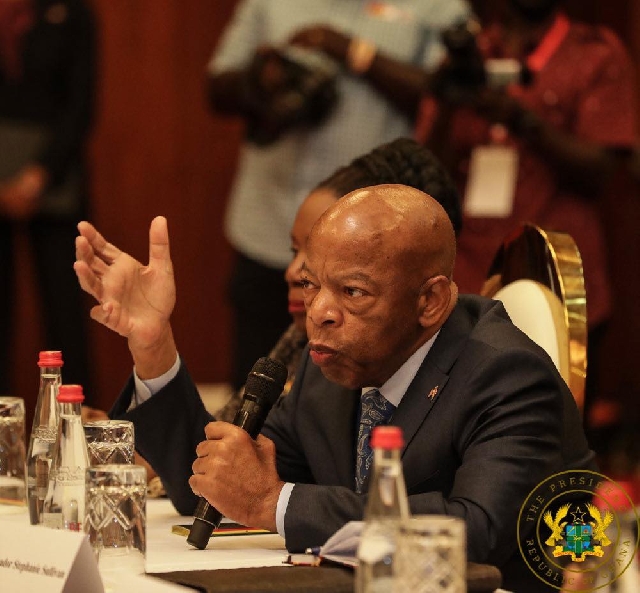 Ghanaian President, Nana Akufo-Addo, has consoled the family and the people of the United States of America, over the death of civil rights icon John Lewis.

“I have received the sad news of the death of one of the icons of the Civil Rights Movement in the United States of America, Congressman John Lewis”, Mr Akufo-Addo said on social media, adding: “He dedicated his life to helping to realise the goals of the Movement, i.e. to end legalised racial discrimination, disenfranchisement and racial segregation in the United States”.

“Ghana played host to him and a delegation from the US Congress last year, as part of activities to commemorate the ‘Year of Return’. His was a life well-lived”, the Ghanaian leader said.

“The Ghanaian people and I extend our deepest condolences to his family, and to the Government and people of the United States of America. May his soul rest in perfect peace”, he consoled.

The civil rights movement leader who later became a congressman died at the age of 80.

Lewis was one of the “Big Six” civil rights leaders, which included Martin Luther King Jr, and helped organise the historic 1963 March on Washington.

As a congressman, he was a Georgia Democrat, and represented an area which covered most of its capital Atlanta.

In December 2019, Lewis announced that he had been diagnosed with Stage 4 pancreatic cancer.

“I have been in some kind of fight – for freedom, equality, basic human rights – for nearly my entire life,” he said in a statement released at the time. “I have never faced a fight quite like the one I have now.”

During the civil rights movement, Lewis was one of the founders of the Student Nonviolent Coordinating Committee (SNCC), and then became its chairman from 1963 to 1966.

He co-organised and spoke at the March on Washington for Jobs and Freedom, the rally at which Dr King delivered his historic I Have a Dream speech.

Lewis was the last surviving speaker from the march.

Democratic Speaker of the House Nancy Pelosi confirmed Lewis’s death in a statement posted on her website and on social media.

She wrote that Lewis “was a titan of the civil rights movement whose goodness, faith and bravery transformed our nation”, and that as a congressman he was “revered and beloved on both sides of the aisle and both sides of the Capitol”.

“Every day of John Lewis’s life was dedicated to bringing freedom and justice to all,” she said. “As he declared 57 years ago during the March on Washington, standing in the shadow of the Lincoln Memorial: ‘Our minds, souls, and hearts cannot rest until freedom and justice exist for all the people.’

“How fitting it is that even in the last weeks of his battle with cancer, John summoned the strength to visit the peaceful protests where the newest generation of Americans had poured into the streets to take up the unfinished work of racial justice.”

Upon news of his death, civil rights group the NAACP tweeted that they were “deeply saddened”.

“His life-long mission for justice, equality and freedom left a permanent impression on our nation and world,” the organisation said. “The NAACP extends our sincerest condolences to his family, and we send prayers of comfort and strength to all.”

In a statement, former President Barack Obama said he had spoken with Lewis after a virtual town hall with a group of activists following the death of George Floyd. Obama said Lewis could not have been prouder of their efforts – “a new generation standing up for freedom and equality”.

“Not many of us get to live to see our own legacy play out in such a meaningful, remarkable way. John Lewis did,” he said.

“And thanks to him, we now all have our marching orders — to keep believing in the possibility of remaking this country we love until it lives up to its full promise.”

Former presidential candidate Elizabeth Warren tweeted that Lewis “was a true American hero and the moral compass of our nation”.

Lewis’s death comes on the same day as the death of fellow civil rights leader C T Vivian at the age of 95. Vivian helped organise the Freedom Rides – a protest to integrate buses in the south – and later went on to lead the Southern Christian Leadership Conference (SCLC).