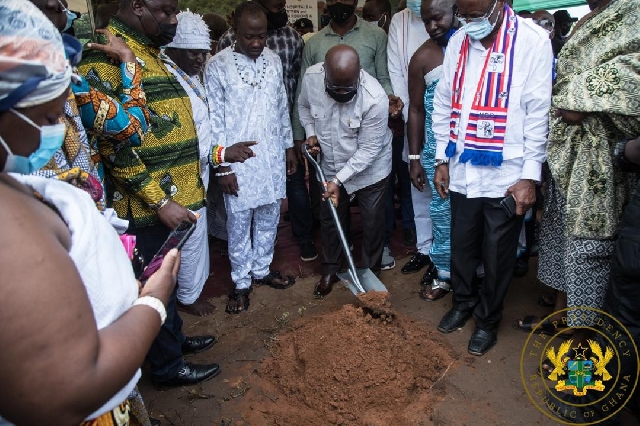 President Nana Addo Dankwa Akufo-Addo on Sunday, 25th October 2020, cut the sod for the construction of phase one of the Tema-Aflao road, in fulfilment of a pledge he made when he opened the Tema Interchange project.

Once completed, this project will alleviate the plight of motorists traversing the Tema-Aflao stretch, and tie into the Trans-African Highway Project, from Lagos to Abidjan, with the current two-lane dual carriageway being expanded into a three-lane carriageway in each direction.

With commuters having to spend over four hours traversing the road along the Dawhenya township, the President described the situation as “very unproductive”, hence the move by Government to address the situation on that road and other areas along other national corridors.

At the ceremony, President Akufo-Addo noted that the need to upgrade this corridor has been evaluated in the context of the overall Trans-West African Highway, in addition to the fact that this road serves as the backbone for a significant and growing coastal residential, economic and recreational population.

Additionally, the Transport Infrastructure Framework of the Ghana Infrastructure Plan (2018-2047) recognises some road sections as being critical to the socio-economic development of the country. The Plan, therefore, highlights that the development of these priority corridor roads will facilitate trade and movement of goods and services within the West African Region.

He reiterated the commitment of the government to ensure the implementation of the declaration of 2020 as the “Year of Roads”, adding that more sections of roads across the country are being upgraded from gravel surface to bitumen surfaced dressed roads or asphalt concrete surfacing.

The President expressed the gratitude of Government and the Ghanaian people to the British Government for their continued assistance and support towards the construction of the Tema-Aflao road.

President Akufo-Addo entreated the general public and all who, in one way or another, will be affected by the construction of this road, to observe the traffic management measures that the contractor will put in place during the execution of the works.