‘Akufo-Addo has been stellar, competent; he’s done all the things Mahama said he couldn’t do’ – Bawumia 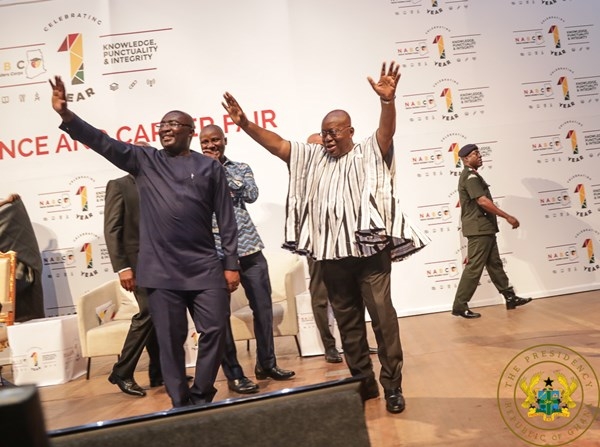 Vice President Dr Mahamudu Bawumia has said President Nana Akufo-Addo has achieved so much in his first term of office and urged Ghanaians against returning former President John Mahama and the National Democratic Congress to power.

According to Dr Bawumia, President Akufo-Addo has been able to do all the things Mr Mahama and the NDC said he could not do.

“Every single Ghanaian has been positively impacted by the policies and programmes of this Government.

“From education, to health, the economy, everywhere. Nana Akufo-Addo has displayed stellar, competent leadership” Dr Bawumia said when he addressed a durbar of chiefs and people at Amanfrom in the Bortianor Ngleshie Amanfrom constituency on Tuesday, 29 September 2020.

“Now”, he said, “contrast that with the preceding eight years under the NDC and John Mahama”.

“The sheer incompetence which run the economy into the ground and brought healthcare to its knees.

“The economy that could not pay even teacher and nurse trainee allowances.

“That could not employ graduates.

“After almost four years of stellar, decisive competent leadership, we cannot go back to the era of incompetent, visionless leadership. We owe ourselves and generations unborn a duty to ensure the NPP is given another term under Nana Addo Dankwa Akufo-Addo to continue with his transformational leadership”, he added.

Dr Bawumia, who made the declaration at the beginning of a four-day working tour of the Greater Accra Region, said the December polls were a contest of records, a straight comparison between the 8 years under the NDC and former President Mahama, and the almost 4-year tenure of the NPP under President Nana Akufo-Addo.

Vice President Bawumia reminded Ghanaians that President Nana Akufo-Addo and the NPP have a proven track record of delivered promises, for which the party and President deserve another term to do even more.

“We have done so much in the almost four years that we have been in charge. We promised Free SHS and we delivered. We delivered one ambulance per constituency, as promised.

“He promised roads and he is delivering. Our management of the invisible enemy, the Covid pandemic has been praised as amongst the best in the world.

“Looking around, all the things the NDC said we could not do we have done. It is a testament to our commitment to the progress of Ghana and development in Freedom.

“We are the party that makes calculated pledges and deliver on our pledges. We don’t just pledge or promise but we deliver and deliver in honesty with absolute competence. We can’t make all of this progress and go back to incompetence,” he stated.

“Our main opponent, John Dramani Mahama, has shown he is incompetent, vision-less and lacks credibility. A leader must be consistent and have firm convictions. But Mr Mahama is not like that. Today, he says this, then the next day he says another thing. On important national issues like Free SHS, Health Insurance, teacher and nurse trainee allowances, Okada and other things, he has shown he is inconsistent. He lacks credibility, and has no vision for the development of this nation.”

Ghana, the running mate of Nana Addo Dankwa Akufo-Addo said, deserves a leader who, in crafting and implementing policies and programmes, thinks about the next generation and not the next election.

“You have heard Mr Mahama making all sorts of promises just to get votes. Okada legalisation. One Zongo one mortuary. He knows these are not what the nation needs at this time, but to get votes, he will say anything.

“Let us give the man and the party we can trust, the man with a proven track record of competent, visionary, transformational leadership, Nana Addo Dankwa Akufo-Addo, another term to continue to do even more for Ghana.”