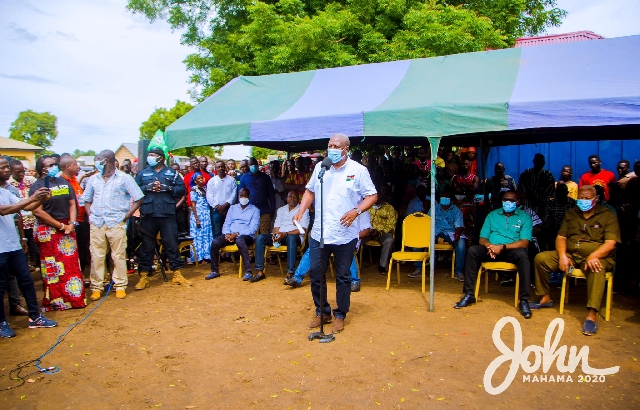 The flagbearer of the National Democratic Congress (NDC), Mr John Dramani Mahama, has described the one village-one dam initiative of the governing New Patriotic Party (NPP) as a monumental failure.

According to him, the dams being constructed can best be described as dugouts which cannot serve any irrigation purpose.

Addressing a separate durbar of chiefs at Loggu and Mwane in the Wa East constituency, as part of his four-day tour of the Upper West Region, Mr Mahama wondered why the NPP would lie to Ghanaians over the dams knowing very well that it can only provide dugouts.

“In 2016, when the NPP came with the promise of one village one dam, I personally asked what kind of dams they are talking about because there are different kinds of dams but they refused to answer,” Mr Mahama said.

He stressed that Ghanaians no longer need dugouts, as it cannot be used for irrigation farms.

Mr Mahama, therefore, urged Ghanaians to beware of fake promises from the NPP and vote massively for the NDC on 7 December 2020 to enable it to provide good leadership for all Ghanaians.