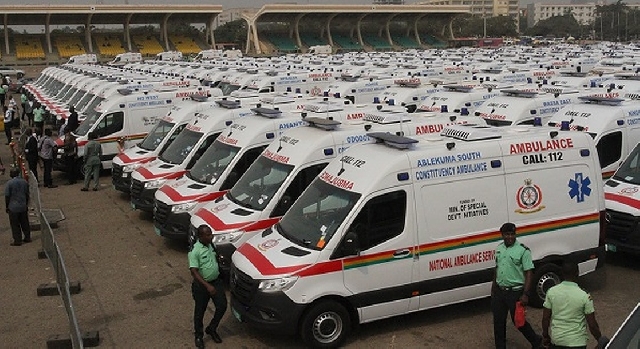 President Akufo-Addo commissioned and presented the ambulances in 2019

Movie Director, Leila Djansi has lauded President Nana Addo Dankwa Akufo-Addo for providing ambulances for all constituencies across the country.

According to Ms Djansi, the availability of state-of-the-art ambulances saved her sister’s life.

Via Twitter, ‘the Sinking Sands’ director described the ambulances as meeting “world’s standard.”

She tweeted on 1 October 2020: “Much appreciation to Ghana’s President @NAkufoAddo for the Ghana National Ambulance Service. A fully equipped vehicle complete with monitors, resuscitation kits and professional staff. Def world standard. Saved my sister. Thank you! Hope the hospitals also become as equipped”.https://platform.twitter.com/embed/index.html?dnt=false&embedId=twitter-widget-0&frame=false&hideCard=false&hideThread=false&id=1311705043893133313&lang=en&origin=https%3A%2F%2Fwww.classfmonline.com%2Fentertainment%2FAkufo-Addo-s-ambulance-saved-my-sister-s-life-Leila-Djansi-18885&siteScreenName=Class913fm&theme=light&widgetsVersion=ed20a2b%3A1601588405575&width=550px

President Akufo-Addo, on Tuesday, 28 January 2019, commissioned and presented 307 new, state-of-the-art ambulances to the National Ambulance Service, as promised during his 2016 campaign.

The ambulances, under the management of the National Ambulance Service, have been distributed to 275 constituencies.

Thirty-two ambulances have been stationed at the headquarters of the Service.