Akufo-Addo’s first term achievements “unprecedented”; give him 4 more to do more – Samira 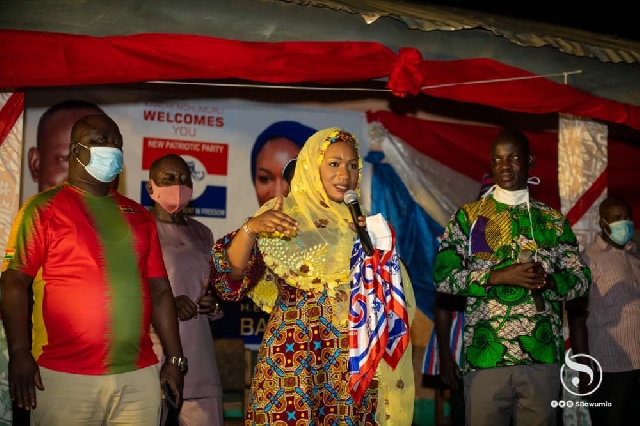 Mrs Samira Bawumia, wife of Vice President Dr Mahamudu Bawumia, has applauded the achievements of the Akufo-Addo-led administration, saying development under the government’s first term has been unprecedented in the history of the country.

According to Mrs Bawumia, the government has decentralised development under its first term, which according to her, is “mind-boggling” and, therefore, believes President Akufo-Addo will do more to alleviate the plight of the ordinary Ghanaian if given another term in the upcoming election on December 7.

Speaking at Krachi FM as part of her campaign tour of the Oti Region on Monday, 14 September 2020, Mrs Bawumia said: “Our one constituency-one million-dollar [initiative] is to decentralise infrastructure. So, if I live in Krachi and you tell me you’ve constructed an overhead at Circle in Accra that they refer to as Dubai, how does that benefit me a resident of Krachi?”

“But under the NPP policy, we are growing together. It is an inclusive government, so, we say we are spreading the resources across the country so that each development will touch every constituency in this country.

“If you’re a doubting Thomas, check our delivery tracker. Every constituency has gotten massive infrastructure improvement.

“What we have done is unprecedented in terms of first-time government that has kept to its promises and even doing more than it could despite the circumstances we inherited.

“We came to meet the IMF situation where there was a ban on public sector employment.

“Today, we’ve instituted NABCO with over 100,000 graduates given jobs, we’ve cleared the backlog of nurses’ allowance and etc., it is mind-boggling.

“We’ve done an incredible job but there’s more to be done; that is why we are saying give Nana four more to do more.”