Akufo-Addo’s only claim to fame is free SHS – Mahama 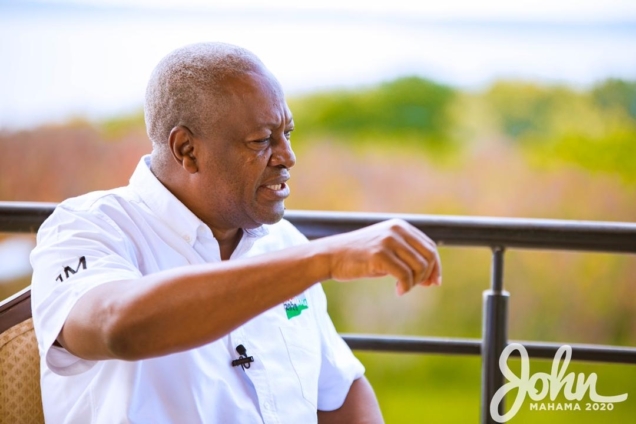 Apart from using the bountiful oil revenue he inherited to fund his “only claim to fame”, being Free SHS, President Nana Akufo-Addo has nothing to show for all the money he has borrowed during his first four-year tenue of office, former President John Mahama has said.

Additionally, the presidential candidate of the main opposition National Democratic Congress (NDC) said Finance Minister Ken Ofori-Atta has proven to be a failure as far as his performance with the economy is concerned, considering the kind of economy he inherited.

In Mr Mahama’s view, the President’s cousin has been “abysmal” in handling the economy.

In an interview with Woezor TV on Friday, 23 October 2020, the presidential candidate of the main opposition National Democratic Congress (NDC) said Mr Ofori-Atta has been “cooking” the books all this while and has managed to “fool” the International Monetary Fund (IMF) as well as international rating agencies Moody’s, Fitch and the Economist Intelligence Unit (EIU).

“The IMF has been a bit hypocritical in all this because the signals have been there. It’s not today that we raised the issue of the Finance Minister cooking the books. He’s been cooking the books over the last four years”, the flagbearer of the NDC said.

He explained: “What he does is: he leaves out some big ticket budget items and puts them as footnotes so that he can get a better fiscal report to give to the international community”.

In his view, Mr Ofori-Atta should have built a better economy from what he inherited rather than ran it down the way he has done.

“We managed this economy with one oil field, the Jubilee field if you remember. At the time we were leaving office, we had completed two more oil fields that virtually tripled revenues from oil. With that kind of extra revenue, one could just imagine what they could have done in terms of transforming this economy but they’ve not been able to.

“I mean, you can see everywhere, there’s nothing to show for it”, he noted.

“Their [government’s] only claim to fame”, Mr Mahama said, “is Free SHS and, so, Free SHS is being funded from the oil revenues but aside from that there’s nothing to show for it and the signs were there that this economy was being mismanaged; first by over-borrowing, over four years he’s gone onto the international market and raised $9 billion and it’s only gone into consumption. You don’t see what it’s been used for.

“Normally, if you go on the market and you raise money, you use a bit of it to retire your high-interest local debt but you must use some part of it for other important projects that are tangible and that transform the economy but that has not happened”, Mr Mahama noted.

The former President further said that the debt-riddled energy sector is enough evidence that bears him out as far as what he sees as the mismanagement of the economy is concerned.

“Today, the single-largest threat to the economy is the almost $1.5 billion that he owes independent power producers.

“We came up with the ESLA and the way we structured the ESLA, over five to six years, we would have finished paying off that debt. Today, that debt has ballooned to $1.5 billion.

“The IPPs are threatening to shut down this country’s power supply if the Finance Minister doesn’t pay them.

“He’ [Ken Ofori-Atta] gone begging them; when they threaten he’ll find a little money and go and give to them and ask them to be patient”, adding: “He’s just waiting to hand over a broken economy to the next administration. The economy is already broken. COVID didn’t break it”.

In Mr Mahama’s view, were the economy as sturdy as the Akufo-Addo government had led the world to believe, it would not have crumbled amidst the COVID-19 pandemic.

“The thing is if you have an economy, it must have sufficient buffers and, so, if you say: ‘This was the best economy in African’ and he was the best Finance Minister and the economy was resilient, why is it that just one pandemic and your economy is already in ICU?”

“You’ve borrowed almost 11 billion because of COVID, we don’t know how you’ve administered it, you’re giving the stimulus package to your party chairmen and all that, you’ve taken their MoMo numbers and you are sending it to them. You’re using NBSSI to try and give money to people to politically influence them for elections, I mean this government has been a disaster; seriously, and I’m sure the day will come when Ghanaians will realise it.

“They use propaganda to hoodwink the public that they’ve done so well, ‘we’re the best economic managers’; businesses are collapsing. Just speak to the business community, people are struggling, not because of COVID, even before COVID.

“I spoke to some businessmen who are not NDC, they’ve always voted for NPP and when this government came into office, they said their businesses are struggling.

“I mean the amount of profit they used to make under NDC has suddenly collapsed, they are struggling to pay their workers and they are just trying to keep their businesses afloat because they hope that there will be a change and that better times will come in the future”, Mr Mahama revealed.