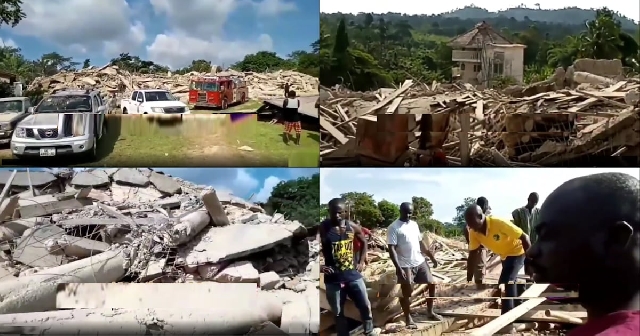 The death toll in the Akyem Batabi church collapse disaster has climbed to 10, local reporter Kenneth Oduro, who works with Akyemansa FM in the Eastern Region, has reported.

According to him, the 10 bodies were among 17 victims who have been pulled out of the rubble so far.

The other seven survived with injuries.

The dead victims are made up of eight women and two men, Kenneth Oduro told Kofi Oppong Asamoah on Class91.3FM’s mid-day news 12 Live on Wednesday, 21 October 2020.

Meanwhile, the District Chief Executive of Asene Manso Akroso, Mr Alex Inkoom, has said his District Engineer revealed to him only on Tuesday, 20 October 2020, just hours after the collapse of the three-storey church at Akyem Batabi that he (the Engineer) had warned the church of the looming danger two weeks earlier after passing through the area.

The congregants of the Church of Prosperity, numbering more than 60, had converged on the church premises to pray and fast for their founder, who had been taken ill, when the incident happened.