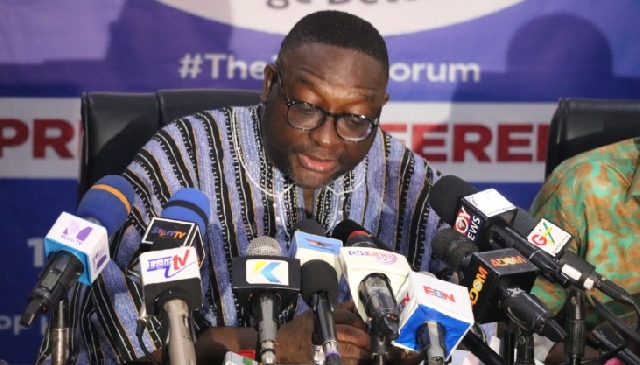 The Communication Director of the governing New Patriotic Party (NPP), Mr Yaw Buaben Asamoa, has said former Special Prosecutor Martin Amidu is blowing hot air over claims that his life has been threatened after resigning from office.

Mr Amidu claims to have intelligence that some persons are planning to burn his house and rob him.

He said if any harm should befall him, President Akufo-Addo should be blamed for it.

But reacting to Mr Amidu’s claims of threats to his life, Mr Asamoah told Class 91.3FM’s Kofi Oppong Asamoah on 505 that Mr Amidu should report to the police if he feels insecure.

“Martin Amidu is blowing hot air, total hot air. Martin Amidu is history, he is over, we’ve shown you the President’s position on all the matter he has brought into the fore and, therefore, as far as we are concerned as a political party, we are done. He’s saying he’s been threatened, he should go to the police…,” Mr Asamoa said.

Mr Amidu alleged that he resigned because President Akufo-Addo was interfering with his work in the Agyapa deal after he discovered a lot of corruption associated with it through his anti-corruption risk assessment.

According to him, several attempts by him to speak to the Minister of National Security, Mr Albert Kan Dapaah, on the threats against him, have hit dead ends.

“I tried to call Kan Dapaah, he didn’t pick it and I got a former national security advisor to contact him and tell him that, and I know the persons involved, I can name them but I reserve it for the meantime”, he said.

“I put my life for the republic of Ghana and the president will be responsible for anything that happens to me”, Mr Amidu charged.

He said there have been a plethora of threats of robbery and arson against him. “The intelligence is there and I called the minister of national security but he didn’t pick and I got a former national security advisor to speak to him and this fact is now known and I say that the president will be responsible for anything that happens to me”.

Meanwhile, President Akufo-Addo has ordered the Inspector-General of Police to provide 24-hour protection for Mr Amidu.