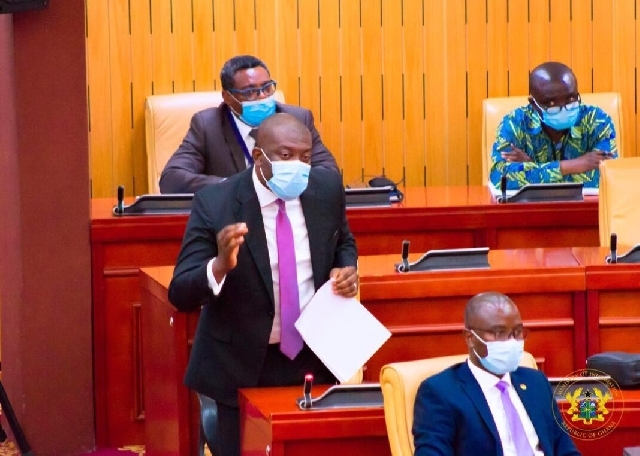 Constituents of the Yapei Kusawgu Constituency in the Northern Region have called on the Minister of Information, Mr Kojo Oppong Nkrumah, to apologise and retract a statement he made against their MP, Mr John Jinapor or incur their “wrath”.

Mr Oppong Nkrumah referred to the opposition lawmaker as ‘Papa no’ during a debate on the floor of the house on Friday.

The term gained negative connotation after it was widely referred to by actress Tracey Boakye and singer Mzbel during their social media feud over a sugar daddy.

According to the statement: “The chiefs, indigenes, elders, opinion leaders, imams, pastors, youth, women groups and the good people of Yapei Kusawgu Constituency find this conduct by the minister as very unfortunate, unacceptable and disrespectful.”

The statement said it is “so sad, shameful and scandalous to have emanated from a whole minister of state, who is expected to show moral uprightness in all his affairs, especially, when it has to do with Parliament, a law making arm of government, but not descend that low …”

“This despicable demeanour by Kojo Oppong Nkrumah came to us no surprise, since his appointment is one that was not based on merit but on the basis of his familial relationship with Nana Akufo-Addo, the failed president”, the NDC said.

The statement emphasised that Mr Jinapor “is happily married, well cultured and has “always made his submissions” on the floor of parliament “devoid of insults, hate and personality attacks”.

“These distinguished qualities of Hon John Jinapor are not veiled from the Ghanaian public and have, as such, won him the love and respect of the Ghanaian people”, the NDC noted.

The Yapei Kusawgu NDC said it takes “strong objection to that reckless, childish, unfounded and ridiculous comment” made by Mr Oppong Nkrumah.

The people of Yapei Kusawgu Constituency are, therefore, demanding that Mr Oppong Nkrumah, within “three clear days,” withdraw that “statement and apologise to the hard-working MP or face our wrath.”

The statement added: “Hon John Jinapor has an impeccable track record and must be upheld at all times.”