B/R: Remember the hardships NDC put you through and vote for Akufo-Addo – Bawumia tells Banda constituents 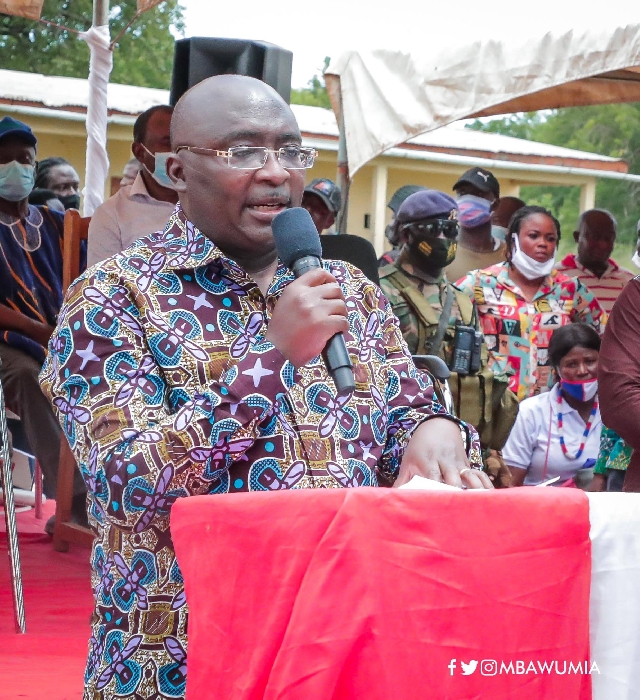 Vice President Mahamudu Bawumia has urged the people of the Banda community in the Bono Region to consider their living conditions under the current New Patriotic Party (NPP) administration and compare it with the hardship they endured under the erstwhile NDC administration, before deciding whom to vote for in the upcoming December polls.

He indicated that the lives of the people of Banda have been much-bettered under the current NPP government, hence they must give the party and President Nana Akufo-Addo four more years to continue.

Dr Bawumia was speaking at Banda during his 2-day tour of the Bono Region.

Addressing a gathering of the chiefs and people of the community, the Vice President assured the people of a new hospital for the district under government’s 1district-1hospital project.

The Vice President visited the Banda Constituency, Nsawkaw in the Tain Constituency, and cut sod for the construction of a 29-kilometre Sinohydro road project at Sunyani Berlin Top in the Sunyani West Constituency.

“You can attest to the fact that, over here, you have benefitted from the NPP government, three-and-a-half years to four years, we all know the benefits you have derived.

“We haven’t said we’ve finished all the work with just one term.

“We cannot finish all of it, so, give us 4 years to do more for you, to continue the work.”

He further assured the people that all requests made to the government will be fulfilled during the NPP’s second term of office if retained in the December polls.

“Every request by Nana for the Banda community, God willing, when we assume the reins of government again after the election, we’ll grant all the requests.

“So, if you see your current state of living, and see how NPP has worked, we’ve done better than the NDC.

“When it’s time to vote, remember the works NPP has done and the difficult times NDC put you through and vote for Nana so to continue the good work,” Dr Bawumia added.