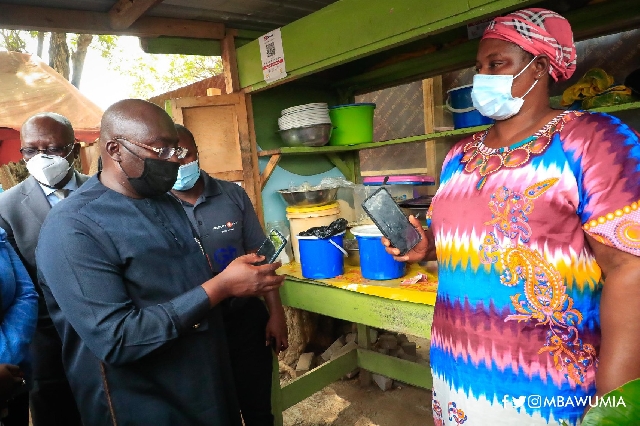 Vice-President Dr Mahamudu Bawumia has urged all merchants in the informal and formal sectors to acquire and start using the all-new, all-inclusive Universal Quick Response Code (QR Code) system developed for Ghana, as part of efforts by the Akufo-Addo government, to migrate the economy from a cash-based one to a cash-lite one.

Outdooring the QR Code at Auntie Muni’s, a popular waakye joint on Thursday, 19 November 2020, Dr Bawumia said the system is so flexible and easy to use by everybody to receive or pay for anything electronically.

“We are here to formally outdoor the Ghana Quick Response Code system or the QR Code, as it is known for short. It’s a very very historic day because we are solving a major problem here in Ghana and it is historic because Ghana will be the first country in Africa, to launch a QR Code payment system; and not only are we the first in Africa, we are also, as far as I’m aware, the third country in the world to do a Universal Quick Response System after Singapore and India”, the Vice-President said.https://www.facebook.com/plugins/post.php?href=https%3A%2F%2Fwww.facebook.com%2FMBawumia%2Fposts%2F3516076885151962&show_text=true&width=552&height=842&appId

According to him, even the QR Codes systems of Singapore and India “only cater for bank customers” but “Ghana’s QR Code system will cater for both bank and non-bank customers”, explain: “That is those who use mobile money as well as have bank accounts”.

“So, in this regard, Ghana’s QR Code system is unique and it is the first of its kind in the world and, so, we have to be rightfully proud as Ghanaians that we have a technology to solve a problem that exists in our society but in doing so, we are really leading the world in this manner and, so, I am very proud here and it has taken collaborative effort”, Dr Bawumia noted.

He said: “We just didn’t wake up and find a Universal QR Code in Ghana. The Ministry of Communication has been critical; the Bank of Ghana, GhIPPS, banks, telcos, fintechs – this is what is so unique about the Ghana story; it’s very very unique that we have had collaboration from all these stakeholders and we’ve been able to actually come up with this Universal QR Code”.

“So, you scan the QR Code and then you can confirm that this is the merchant and I’m paying this amount to the merchant, so, it’s very secure in that regard; it is very convenient”, he observed, adding: “We are solving a problem that has been with us practically since independence: we’re a cash-based economy and a cash-based economy is a very inefficient economy and we are cash-based because so many people are excluded from the financial system, so, we do a lot of financial transactions through cash, which means robberies can take place, as people carry cash around”, Dr Bawumia noted.

He said the technology also comes in handy as the COVID-19 pandemic ravages the world.

“In this COVID environment, in fact, one of the ways you transmit the virus is by handling things like cash; e-commerce, too, doesn’t develop if you have a cash-based economy, so, we have been thinking, since we’ve been in office, of how to solve this problem: how do we move Ghana from this cash-based economy to an electronic payment-based economy?”

“So, we are solving this problem, saying that: OK, if you are a merchant, any type of merchant or even if you’re a shoeshine boy or a trotro operator, one of the problems of going electronic is that the infrastructure, most merchants don’t have or cannot afford a point-of-sales device, it’s very expensive for small merchants to maintain; you pay fees and so on and it’s very cumbersome and, so, if you are a small merchant, a QR Code for a small merchant means all payments go directly into your bank account or into your mobile money wallet right there, so, you don’t need to be carrying that cash”.

“And, for anybody who uses the QR Code to make a payment, it’s free; you don’t pay any fee. The merchant is also not charging any fee and anybody can set up a QR Code for just around 50p.

“If you are a merchant and you need the QR Code, you can talk to your provider, being the bank, telcos or whatever and for just around 50p, you can set it up. So, if you’re a waakye seller or koko seller or trotro operator, a church or mosque or school or utility provider, a shoeshine boy, you can have a QR Code.

“If you’re organising a funeral and you want to get donations electronically, you can put the QR Code on the invitation or the brochure and people can just scan it and pay donations straight to you. You don’t need to carry bankers to your funeral to collect cash. So, it’s so versatile, available for everybody to use”, Dr Bawumia explained.

Dr Bawumia used it to buy some waakye to demonstrate how it works.

To him, the coming into effect of the QR Code system means “is a very bad news for armed robbers”, since a lot of transactions would be done electronically now.