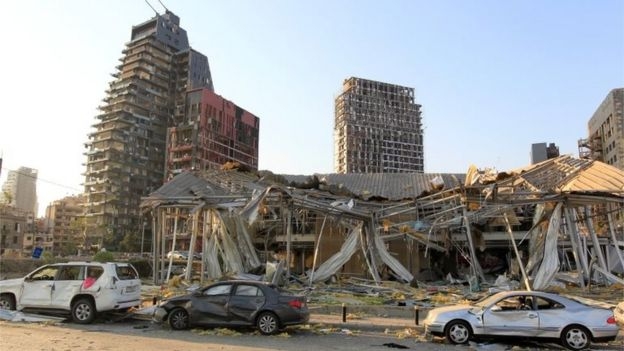 Rescue workers in Lebanon are searching for more than a hundred people who are missing after a huge explosion devastated the port area of the capital Beirut on Tuesday.

The blast killed at least 100 people and injured more than 4,000 others.

The whole city was shaken by the explosion and a mushroom cloud could be seen spreading over the port area.

President Michel Aoun said the blast was caused by 2,750 tonnes of ammonium nitrate stored unsafely in a warehouse.

Ammonium nitrate is used as a fertiliser in agriculture and as an explosive.

He scheduled an urgent cabinet meeting for Wednesday and said a two-week state of emergency should be declared.

The country will observe an official period of mourning for three days from Wednesday.

Eyewitness Hadi Nasrallah says that he saw the fire but did not expect the blast. “I lost my hearing for a few seconds, I knew something was wrong, and then suddenly the glass just shattered all over the car, the cars around us, the shops, the stores, the buildings. Just glass going down from all over the building,” he told the BBC.

The BBC’s Lina Sinjab said she could feel the wave of the explosion from where she was, a five-minute drive from the port area . “My building was shaking, it was about to fall, all windows were forced open,” she said.

The blast was also felt 240km (150 miles) away on the island of Cyprus, in the eastern Mediterranean, with people there saying they thought it was an earthquake.

BBC journalist Rami Ruhayem said there was chaos in the aftermath of the blast as ambulances with their sirens wailing inched their way through heavy traffic to get to the site. “Shards of glass blanketed the highway leading into Beirut from the north, as a tractor cleared the rubble.”