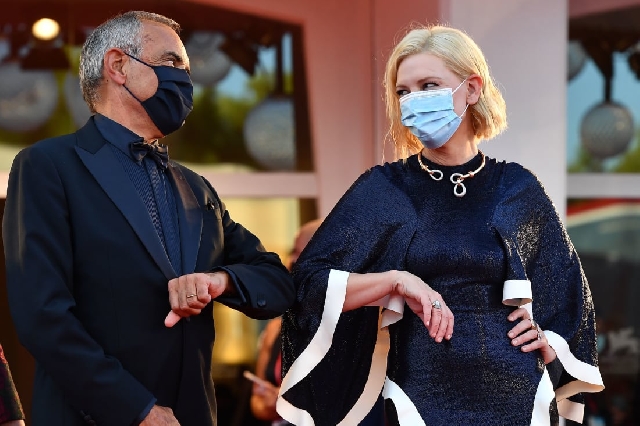 The red carpet at this year’s Venice Film Festival is proving to be unlike any before it, with celebrities arriving on the island of Lido in face masks and gowns to a muted reception.

The 77th edition of the festival is one of the first major cultural events to take place in Europe since the coronavirus pandemic took hold on the continent, with the Cannes Film Festival cancelling its 2020 event in May.

“We are not proud to be the first, after the forced pause, to be able to do so,” said Roberto Cicutto, president of festival organiser La Biennale di Venezia, in an online statement.

“But we are proud of having shown… that it can be done, putting in place all the safety measures and presenting a program that has little to envy those of the preceding years.”

Those safety measures include mandatory face masks, temperature checks, physical distancing during screenings and a wall built around the red carpet to keep the public away.

Though attendance was much sparser than in previous years, celebrities still touched down on the red carpet in style.

Tilda Swinton, who is a Chanel ambassador, arrived at the opening ceremony in a white blouse and black crepe layered skirt from the brand’s Spring-Summer 2020 Haute Couture collection.

The glimmering gold carnival mask she carried was later traded for a loftier gold object: the Golden Lion Award for Lifetime Achievement, awarded to her during the event.

Actor and jury president Cate Blanchett greeted festival director Alberto Barbera by touching elbows, with both wearing masks. Blanchett paired hers with an Esteban Cortazar cape dress she had previously worn to the “Carol” premiere at the 2015 London Film Festival.