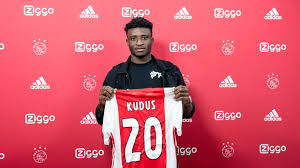 Accra, July 16, GNA – Kudus Mohammed a member of the senior national team, the Black Stars midfielder has completed a move from Danish Super Liga side FC Nordsjaelland to Ajax Amsterdam of Netherlands.

The teen sensation joined the European giants on a five-year deal after successfully passing his mandatory medical on Thursday morning.

The deal is worth nine million Euros, the biggest transfer for a Ghanaian teenager in recent times.

Mohammed, 19, had a good season with FC Nordsjaelland in the ongoing campaign, scoring 11 goals in 26-appearances for the Wild Tigers.

He was dropped ahead of Nordsjaelland’s playoff in the Danish Super Liga to allow him to complete the mega move.

He played his maiden game for the Black Stars in the Nations Cup qualifier against South Africa, a game he scored his debut goal in.

His recent rise in football has seen him earn a nomination for the Golden Boy Award in Europe.

He joins the likes of Anthony Obodai as Ghanaian players to have played for the Dutch giants.