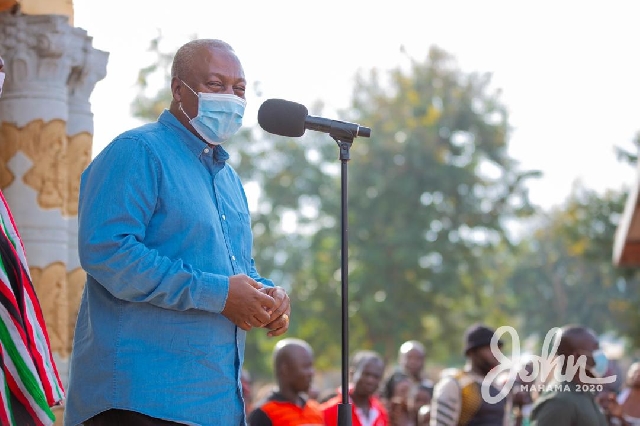 The flagbearer of the National Democratic Congress (NDC), John Dramani Mahama, has announced that the Bono, Bono East and Ahafo regions will be the designated centres for agro-processing in the country.

In an earlier tour of the Bono and Bono East Regions where cashew, pepper and tomato are grown in commercial quantities, President Mahama promised that processing factories would be established in the regions, if he wins the December 2020 elections. This, he explained, will help add value and address the perennial problem of post-harvest losses and low crop prices to farmers.

Addressing a durbar of chiefs, farmers, drivers, artisans and other groups in Techimantia in the Ahafo region on Friday, the NDC leader expressed confidence that the establishment of the processing factories will create more jobs, value and help the farmers earn more money for themselves and their families.

Mr. Mahama express his disappointment with the cancellation of the free fertiliser programme introduced by his administration for cocoa farmers, noting that President Nana Akufo-Addo chose instead to sell cocoa the fertilisers marked “not for sale” to the farmers.

He promised the farmers that he will restore the free fertilizer programme.

At the gathering, the former President introduced the NDC Parliamentary Candidate for the area, Hannah Bissue, who was also a former Deputy Minister of Agriculture under his administration. He said it was important to have more capable women in Parliament and therefore entreated the people to vote for her to be their Member of Parliament.