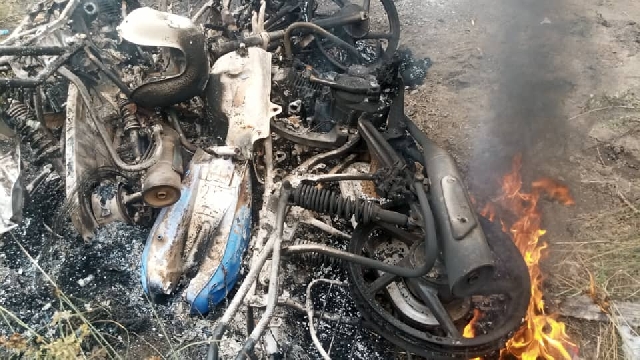 There was confusion at the Step to Christ registration centre in the Awutu Senya East Constituency of the Central Region during the ongoing voter registration exercise today, Monday, 20 July 2020, when muscled gun-wielding men stormed the premises to disrupt the exercise.

Officials of the Electoral Commission took to their heels when the men, numbering about 15 ransacked the place.

According to eyewitnesses, this led to a scuffle and gunshots were fired into the skies.

Three motorbikes were also burnt in the process.

Four people have been arrested so far by the police while investigation continues.

The NDC’s parliamentary candidate for the area, Phyllis Naa Koryoo, has accused the sitting MP, Mavis Hawa Koomson, of being behind the attack.

Ms Koomson has, however, refused to comment on the matter, insisting she will allow the police to conduct its investigations.

However, her campaign spokesperson, Nana Kofi Ntiamoah, told Class91.3FM’s 505 host Valentina Ofori-Afriyie, that there was no iota of truth in the claim that his boss bused macho men to the area to prevent certain people from registering.

Mr Ntiamoah said unlike the NPP, the NDC was only interested in causing “unnecessary tension” by using “thugs” which the party recruited from Bawku and Ashalaja to cause mayhem.

Last week, a similar confrontation at a registration centre at Banda in the Bono Region led to the death of one person who was a teacher trainee graduate.

Monday’s scuffle started when some persons, who the MP for the area, Ahmed Ibrahim, said were members of the Invisible Forces, confronted his brother.

The incident triggered anger among the residents of Tabie, who mounted a roadblock for vengeance.

The suspects were arrested by a joint force of police and military personnel.

The New Patriotic Party’s parliamentary candidate in the area, however, told Class News’ 505 producer Kofi Oppong Asamoah in an interview that the MP’s brother rather launched an attack on him and his people.

Ahmed Ibrahim counter-alleged in an interview with Valentina Ofori-Afriyie that vigilante groups of the NPP have been “hunting for him and his brother like a grasscutter” for the past two years.

He said the perpetrators beat his brother and left him for dead.

Meanwhile, the National Peace Council has observed in a statement that although the ongoing voter registration exercise has been largely peaceful, it is disturbed by some reports of violence at certain centres between the governing New Patriotic Party and the biggest opposition party, the National Democratic Congress.

The Council named some of those centres as Ejura-Sekyere-Odumase Constituency in the Ashanti Region; Kasoa in the Central Region; Asutifi South and Tano South Constituencies in the Ahafo Region; Dormaa West Constituency in the Bono Region, Ho West in the Volta Region as well as Fadama and New Town in the Greater Accra Region.

The Council said its reports confirmed that there were clashes between the supporters of the NPP and the NDC, which had “unfortunately, led to shootings, machete wounds on some identified party activists, resulting in some arrest of persons who allegedly committed these crimes”.

The Council reminded the two parties that having publicly-subscribed to a Roadmap and a Code of Conduct on the eradication of all kinds of political vigilantism and election-related violence, they have, thus, “declared publicly that political vigilantism is inimical to Ghana’s democratic system and must be eradicated”.

“The Peace Council, respectfully calls on the NDC and NPP to strictly adhere to the Roadmap and thence, disassociate itself from any violent activity by any of their members during and after the registration process and to go further to facilitate the arrest of such people who are bent on dragging the path of peace Ghana has taken backwards”, the statement said.

The National Peace Council, as part of its mandate to facilitate and develop mechanisms for conflict prevention, undertook an exercise to monitor the ongoing registration of voters across the country from Thursday, July 2, 2020.

It must be acknowledged that generally, the conduct of the Voters’ Registration Exercise has been peaceful.

Majority of the Registration Centres monitored by our team conducted themselves in civility and in accordance with laid down procedures as provided by the Electoral Commission.

We further acknowledge the fact that the Electoral Commission has, so far, ensured that materials and logistics needed for the effectiveness of the exercise have been made available, notwithstanding some initial bottlenecks which confronted a few Registration Centres.

It’s also worth commending the Electoral Commission and the security agencies for the swift action that they took on the unfortunate happening at Sagnarigu Municipality in the Northern Region on Saturday, July 4, 2020, to ensure peace was timely restored and to protect the integrity of the Registration Process.

The Peace Council is, however, disturbed by recent incidences in some Registration Centres in the following areas in the country, namely, Ejura-Sekyere-Odumase Constituency in the Ashanti Region; Kasoa in the Central Region; Asutifi South and Tano South Constituencies in the Ahafo Region; Dormaa West Constituency in the Bono Region, Ho West in the Volta Region as well as Fadama and New Town in the Gt. Accra Region, where our reports confirmed that clashes between the supporters of the New Patriotic Party and the National Democratic Congress had unfortunately, led to shootings, machete wounds on some identified party activists, resulting in some arrest of persons who allegedly committed these crimes.

The National Peace Council wants to remind our political parties, especially the National Democratic Congress and the New Patriotic Party of the following: That both the NDC and NPP have publicly subscribed to a Roadmap and a Code of Conduct, on the eradication of all kinds of political vigilantism and election-related violence. To this, both NDC and NPP have declared publicly that political vigilantism is inimical to Ghana’s democratic system and must be eradicated.

Consequently, they have both pledged to:

I. Disbanding vigilante groups operating for political purposes; II. Prohibit the ownership, hiring, or utilisation of such groups by the political parties or members thereof; III. Cooperate with state agencies and stakeholders in the total eradication of such groups or incidents of vigilantism in the country.

It’s also worth reminding all political parties, political activists and all citizens that Parliament has unanimously passed the Vigilantism and Related Offences Act, 2019 (Act 999) to prohibit political vigilantism. Any person who takes part in any vigilante activity, act as a member or subscribes to a membership of a vigilante group, contravenes provisions of the Act, and, therefore, commits an offence and is liable on conviction to a term of imprisonment of not less than ten years and not more than fifteen years.

The Peace Council, respectfully calls on the NDC and NPP to strictly adhere to the Roadmap and thence, disassociate itself from any violent activity by any of their members during and after the registration process and to go further to facilitate the arrest of such people who are bent on dragging the path of peace Ghana has taken backwards.

The Council, takes the opportunity to commend the Security Personnel detailed at the E. P church voter registration centre in Accra New Town for the swift manner they arrested and placed before Court, seven persons for allegedly obstructing the security from performing their legitimate duty on July 7, 2020. It is in this respect that the Council calls on the Inspector-General of Police and the Ghana Police Service, to rise up to the occasion as they usually do by arresting any other persons whose actions have the potential to derail the peace of the country.

The Police should always be guided by their motto “Service with Integrity” to ensure human lives and property are protected by enforcing the laws without fear or favour. The National Peace Council concludes by calling on all citizens, not to take the law into their own hands and refrain themselves from taking actions with emotions. We want to remind everyone that all of us have families to take care of, and therefore, must be measured in our utterances and actions in the lead up to the December 2020 elections.

The Peace Council, respectfully, appeals to all Ghanaians to resort to time tested non-violent mechanisms to address any outstanding election-related complaints peacefully, either through the judicial process or by means of available alternative dispute resolution mechanisms.

The National Peace Council and our Regional Peace Councils are ready to offer any assistance any complainant may require in resolving all such electoral disputes. Let’s do all within our abilities to sustain the enviable record of Ghana which was rated as the most peaceful country in the West Africa sub-region by the Global Peace Index (GPI) in their annual ratings of the peacefulness of countries for the year 2019 and 2020. God bless our homeland Ghana.