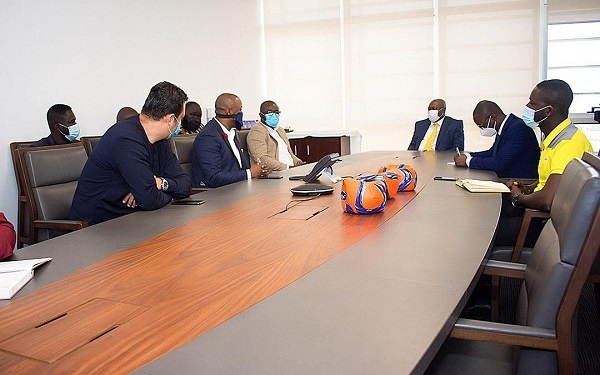 Stakeholders in a meeting

The Managing Director (MD) of CalBank, Mr Philip Owiredu, has reiterated the bank’s commitment to maintaining its long-standing relationship with the Ghana Football Association (GFA) in the development and promotion of Beach Soccer in Ghana.

Mr Owiredu made this known when he met GFA President Kurt Okraku and the Chairman of Ghana Beach Soccer, Mr Yaw Ampofo Ankrah.

Mr Owiredu, who was accompanied by senior CalBank officials, congratulated Mr Okraku on his win, as this was their first meeting since the president of the Ghana football governing body assumed office.

“I hope this long-standing relationship with beach soccer, which is now under the umbrella of the Ghana FA, will see even more strides being made.

“I wish to, once again, congratulate Mr Kurt Okraku on his election. I must say that so far, I have been impressed with the positive tone he carries. I hope this would also materialise into positive action,” he said.

Mr Okraku assured CalBank of improvements in beach soccer in Ghana and a stronger relationship among the interested parties.

“The good work that has been done over the years is highly commendable and that gives us a strong foundation to now accelerate the development of beach soccer to new heights.”

CalBank, one of Ghana’s indigenous financial institutions, has been the headline sponsor of beach soccer, especially the national team Black Sharks, since 2011.

He has been integral in the progress of beach soccer over the years and firmly believes that the sand sport will reach remarkable potentials when adequately supported.