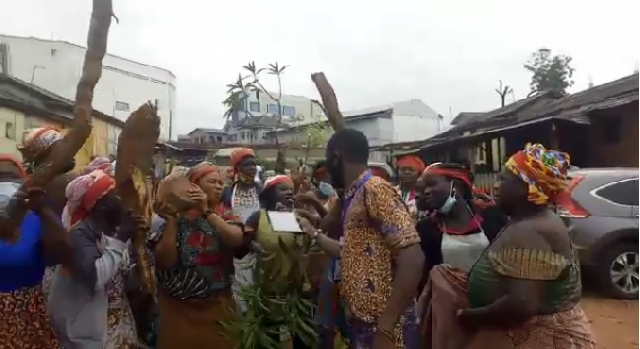 Some residents of the Railways Police Quarters

Some residents of the Railways Police Quarters at CMB in Accra, on Thursday, 27 August 2020 staged a demonstration to draw the attention of city authorities to a demolishing exercise currently ongoing in their community.

According to the residents, they woke up to see excavators and other heavy-duty machinery demolishing their homes.

Clad in red attire to signify their anger, the residents, mostly women, were seen shouting and chanting war songs while wielding tree branches and stones.

One of the residents who spoke to Class News indicated that the man behind the demolishing exercise had alleged that the land had been allocated to him by the police administration.

“We were here three days ago when a certain man called Mr Owusu came here to ask us to remove our things from here because the police administration has allocated the place to him for construction and that he’s behind time.

“Then I was like: how are you behind time? We didn’t just come and live here.

“I asked him to wait because we had not heard anything from our superiors.

“The following day, one of his boys came and insisted I remove my things. Because our rooms are small, we keep some of our things outside.

“I went for night duty, and had just returned to rest when, around 3 am, I heard the excavator, if it had not been for God, my room would have been demolished, currently the building is shaking”, she said.

The intervention of the police, however, halted the demolishing exercise midstream.

The man behind the exercise is said to own some shops within the vicinity and “claims this place will be used for the construction of shops, too”, she added.