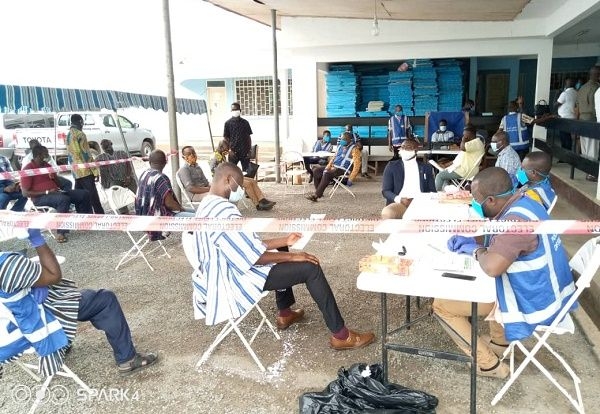 The Coalition of Domestic Election Observers (CODEO) has condemned every reported incident of violence at voter registration centres in the ongoing exercise and called on the security agencies to ensure the perpetrators are dealt with under the law to “serve as a deterrence to others.”

There have been some reported incidents of violence since the commencement of the compilation of a new voter register for the December 2020 polls across the country.

The Electoral Commission started the exercise on Tuesday, 30 June 2020.

At Banda in the Bono Region, for instance, one person, a teacher trainee graduate, was killed during a confrontation at a registration centre.

Mr Collins Dauda, the Member of Parliament for Asutifi South, was allegedly pepper-sprayed while monitoring the exercise at some centres at Acherensua, a town in the Asutifi South constituency.

The latest is the confusion that ensued at Kasoa on Monday, 20 July 2020 where the sitting MP, Hawa Koomson, fired a warning shot at a registration centre as chaos marred the exercise that day.

Three motorcycles were burnt and EC officials took to their heels after gun-wielding men disrupted the process.

Some institutions have blamed the EC for the security lapses at its registration centres.

In the preliminary findings by CODEO on phases two and three of the voter registration exercise conducted from Monday, 6 July to Friday, 17 July 2020 following its earlier report, CODEO strongly condemned “all reported incidents of violence at registration centres including the latest development in the Awutu Senya East Constituency on Monday” as well as “the violent incident at Banda constituency which resulted in the unfortunate loss of the life of one person.”

CODEO, therefore, urged the “security agencies to step up efforts to bring all perpetrators of violence to book as soon as possible to serve as a deterrence to others.”

It called on “all political parties, particularly the New Patriotic Party (NPP) and the National Democratic Congress (NDC), to check the conduct of their agents deployed in registration centres and all persons acting on their behalf.”

CODEO further reminded the “security agencies that the failure to act on such violent incidents will send a wrong signal to criminals and make mockery of the new law on vigilantism.”