Commuters in Sandema stranded after down pour 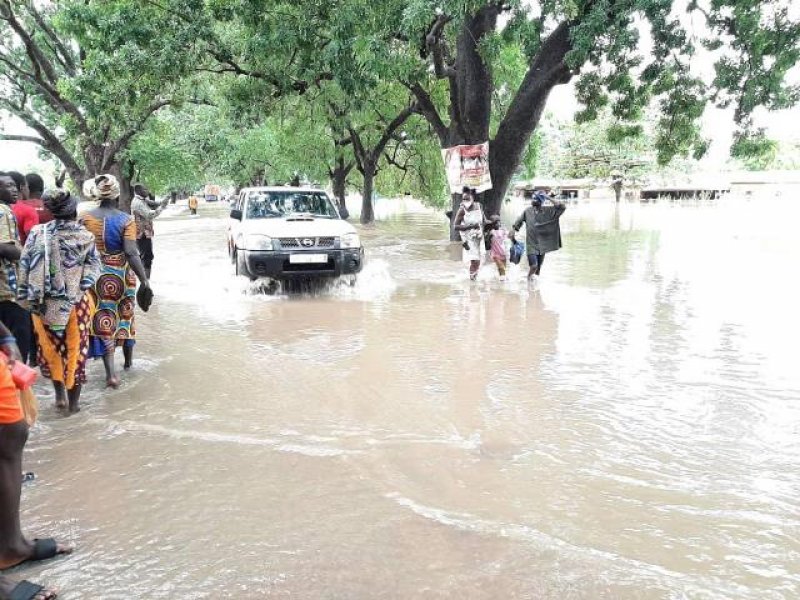 Commuters, in and out of Sandema in the Builsa North Municipality of the Upper East Region are stranded at the entrance to the Township after hours of torrential rainfall.

The stranded commuters, including school children, traders, teachers, nurses among others, who had prepared for work in the early hours of Monday could not cross to their destinations owing to the heavy floods that cut off the main road leading into Sandema town.

When the Ghana News Agency (GNA) in the Municipality visited the scene, it observed that some drivers of heavy-duty trucks and motorbike riders who could not return, risked through the flood waters to their destinations, while the rest of the commuters stood helpless and watched the flood waters.

Nearby houses, farms and the Presbyterian Church building among other structures along the road were submerged, as some trees in the water way also fell off.

Mr Iddi Abraham Lincoln, an Assistant Internal Auditor at the Municipal Assembly, who was part of the stranded commuters, told the GNA that “I was on my way to work this morning and got stuck here. The water is so much, in fact it rained for about four hours this morning, and that caused the flooding.”

He noted it was a perennial problem which had over the years destroyed farm lands, houses and other property of residents, and called on government to help remedy the situation for smooth economic activities in the Municipality, especially in the raining season.

A Community Health Nurse, Madam Cecilia Avoka, who was seated on her motorbike with her two children and watched the flood waters said “I am from work going home, and got stranded here. I cannot pass through this water with these my children.”

Madam Avoka, who was hopeful that the water would recede for her to go home, appealed to authorities to construct a bridge in the area to aid free flow of flood waters, adding that such initiative would also help them commute freely during the raining season.

Mr Gideon Akolgo, also a stranded resident, expressed concern about the situation noting that “This problem has been with us for long, and we don’t know what the authorities are doing. We have over the years complained about this problem without any results.

“Today is Sandema market day, and as you can see, market women here cannot cross with their produce to the market and sell. Those who left before the rains, cannot also return home,” he said.

When the GNA contacted Mr David Amoabil Afoko, the Municipal Chief Executive, he acknowledged that it was a perennial problem and disclosed that the Assembly had reached out to the Irrigation Development Authority (IDA) for support.

“This time around, there is an assurance. They are giving out seven dams. In the whole of the Upper East Region, we are the only Municipality to benefit. In fact, it is the biggest of all the other dams.

“When this dam is constructed, it will hold on all this water that we see that normally flood the area, and solve the problem of flooding in the Township,” the MCE assured.

Asked how fast the dam would be constructed and what immediate measures could be put in place to remedy the situation, Mr Afoko said “The projects were advertised, hoping that in the dry season, contractors will come on.

“In fact, there are two major communities that links them to town, they are totally cut off. We have given those roads and bridges to some contractors, unfortunately, they couldn’t come before the rains set in. We will put pressure on Feeder Roads Department to start work when the water subsides,” he said.