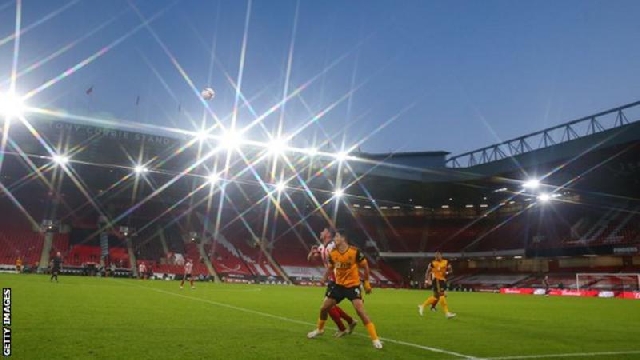 Senior sport officials will meet the UK government this week to discuss the return of fans to venues.

Last week, the government restricted pilot events to 1,000 spectators after a rise in coronavirus cases, and said plans for grounds to be up to a third full from 1 October would be reviewed.

The Premier League has already written to the government over pilot plans.

On Friday, the BBC revealed English football’s top league was to inform the government that it would postpone plans for further pilots until the restriction was lifted, and reiterated its confidence that fans could be returned to stadiums safely.

The Premier League says around £100m per month will be lost by clubs across the leagues while matches continue behind closed doors and it is one of a number of sports bodies to have voiced concerns at the financial impact of an extended period with empty venues.’We wouldn’t last the season’

Reports in the Times on Tuesday claimed attendances could be restricted to between 1,000 and 2,500 from 1 October, depending on the coronavirus infection rate.

Gloucester chief executive Lance Bradley told BBC Radio 4 that level of restriction would be “a disaster” if put in place for the remainder of the season.

“We simply have to get fans back in reasonable numbers as soon as possible to ensure the game survives,” said Bradley. “We can’t keep going losing money with 1,000 or 2,000 fans.

“In the end, that would be a disaster. There are clubs in a worse position than us but we would find it very difficult.

“We wouldn’t be able to make it through the season if we were only allowed crowds of 2,500.”