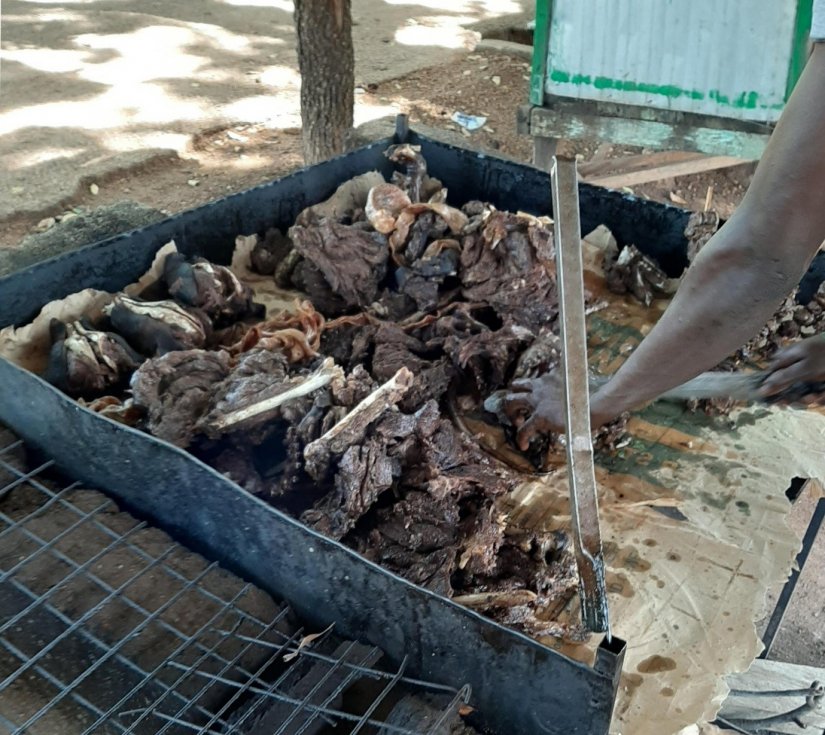 Apart from being a delicacy, others believe it had inherent health benefits and could therefore build the immune systems of consumers against diseases.
A visit by the Ghana News Agency (GNA) to some dog meat joints in the two towns indicated that some residents of the District were gathered around tables on which their delicacy was served to bargain for suitable and affordable prices.

In Ghana, dog meat, which is variously referred to as ‘the chow and pecalili and some foreign jurisdictions is a delicacy among some ethnic groups in the northern sector and some parts of the Eastern region.

It is therefore not surprising that the Frafras and Dagaabas in their annual competitions used puppies as their trophies as it is their delicacy.

In some parts of the Upper West Region, the name ‘dog’ is sarcastically turned into ‘god’, which consumers use to identify the locations of their delicacy.

The delicacy is usually served with powdered dry pepper and chopped onions depending on the buyer’s choice.

At Wiaga, the GNA realized there were improvised ‘Veronica Buckets’ with soap for customers to wash their hands.

At a very popular joint at the entrance to Sandema town from Bolgatanga, the Regional capital, the owner of a dog meat joint, popularly called Dada Bee, said even though customers still patronised the meat, the consumption had reduced as compared to the time the country had not recorded COVID-19 cases.

“The virus has slowed down the business a little. I used to slaughter up to five dogs every market day but now I buy two or three to cook for my customers. My earnings has also reduced and I can hardly get up to GH¢30.00 for ‘susu’, group savings, as I used to save GH¢50.00 after good sales. People are afraid to buy because of the virus,” he said.

“On pay day, I kill up to five dogs, because workers take salary and like to enjoy my special cooking, but when it is mid-month, I kill two or three depending on whether it is a market day or not.”

Dada Bee, said he learnt how to cook dog meat in Bawku, and the pricing of the parts to make profit was dependent on how much he bought a live dog.

Taking the GNA through the process of cooking dog meat, Dada Bee said “When I kill the dog, I put it on burning fire to get rid of the fur after which I wash it with soap and water and cut it into pieces, wash it again and leave it for the water to drain.

“When it drains, I put it in the pot without water and marinate it with salt and other spices. As it steams water comes from the meat itself and it cooks gradually. I wait until the water in it is drained leaving oil from the meat, which I then use to fry the meat a little before I get it to the table for sale.”

While with Dada Bee at his joint, some of his customers were served in black polythene bags, which they took away.

The GNA was later told most of them enjoyed the meat with drinks of their choice at drinking bars.

He said many young men were engaged in that business, as they earned some money to take care of their families and other basic needs.

Another dog meat seller at Wiaga, Mr Charles Aviyale, who operates a drinking spot alongside the dog meat business, told the GNA in an interview that he ventured into the dog meat business after he completed a programme in Electricals at the Bawku Technical Institute in 2007 and could not further his education.

Just like his colleague at Sandema, Mr Aviyale said before COVID-19, and especially on Wiaga market days, he used to slaughter up to five or more dogs, but the virus had affected the business and significantly reduced patronage.

He disclosed that on festive seasons like Christmas, he could slaughter up to 10 dogs, “Now that we have coronavirus, I wonder how the market will be like during the Christmas season.”

He said in spite of the challenges of COVID-19, dog meat business was still good, but “If you are not careful and a dog bites you, the amount of money you will spend on hospital bills will be more than the profit you make.”

Another dog meat seller at Wiaga who spoke on condition of anonymity, said some customers called to register their favourite parts of the dog, while it was still cooking and sometimes the entire meat could bought before it is cooked.

A Seamstress by Dada Bee’s joint told the GNA she had already registered her part of the dog which was still being cooked as at 1130hours, “My favourite part is the leg. I had to register it early otherwise I will not get that part.”

The lady who had no knowledge about rabies until the GNA explained the disease to her, and asked if she was not afraid, said “The heat will kill that rabies you are talking about.”