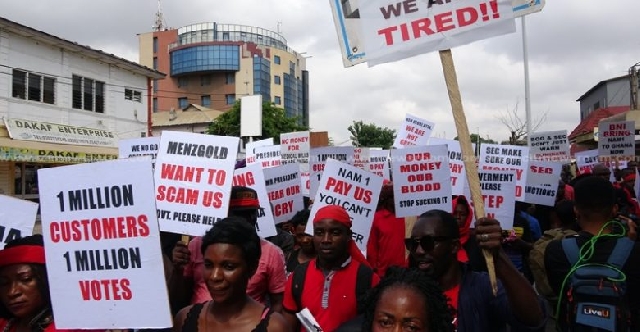 The Accra High Court has placed an interim injunction on the intended demonstration by the Coalition of Aggrieved Customers of the defunct gold-trading company, Menzgold Ghana Limited, as part of their commemoration of two years of the company’s collapse.

The Inspector-General of Police (IGP), Mr James Oppong-Bonuah, filed an order to prohibit the holding of the intended event.

In an order to prohibit the public gathering, the court noted that: “It is hereby ordered that the respondents, the Coalition of Aggrieved Customers of Menzgold Ghana, Isaac Nyarko and Fred Forson are hereby restrained from the intended demonstration to commemorate two years of collapse of Menzgold Company.”

The Coalition of Aggrieved Customers of Menzgold had announced a wreath-laying ceremony in memory of the over 64 customers who lost their lives due to the locking up of their investments in the gold vaulting company.

The wreath-laying ceremony was meant to form part of activities to mark the second anniversary of the collapse of the company on Saturday, 12 September 2020.

In a statement issued by the coalition on Wednesday, 9 September 2020, it noted: “All customers of Menzgold are expected to converge on Dzorwulu, Accra, near Menzgold’s head office at 10 am for the two-hour ceremony”.

It assured members of the coalition that: “There will be adequate security by the Ghana police.”

SEC indicated that upon evaluation of the documentations of Menzgold, the company did not have the licence to deal in gold-trading citing that its operations breached Act 929 and as well posed “as a threat to unsuspecting and uninformed investors”.

The Coalition of Aggrieved Customers of Menzgold recently said that the government must add its members to the list of financial sector cleanup victims, who are expected to benefit from a government-sponsored bailout.

“We write on behalf of members of the Coalition of Aggrieved Customers to request that customers of Menzgold Company Limited be made part of the beneficiaries of the bailout fund for depositors of collapsed institutions by Securities and Exchange Commission,” the aggrieved Menzgold customers said in a statement issued over the weekend.

The government’s bailout is mainly targeted at the clients of some 53 fund management companies that also collapsed.