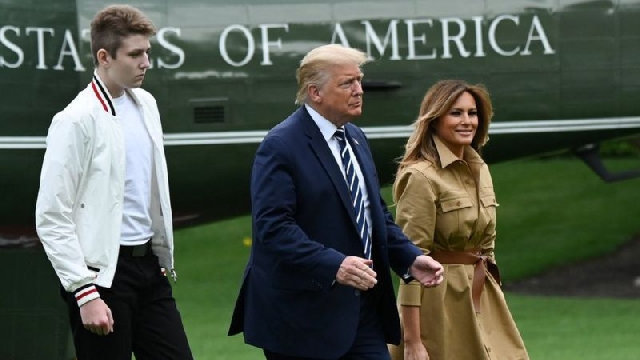 Donald Trump with his wife, Melania and son Barron

But, she said, “luckily he is a strong teenager and exhibited no symptoms”.

Both the president and first lady also tested positive for coronavirus – as well as other White House staff – but have since recovered.

Later at a rally in Des Moines, Iowa, Mr Trump said: “He [Barron] had it for such a short period of time.

Mr Biden did not have any public campaign events on Wednesday, but held a virtual fundraiser and delivered taped remarks to an American Muslim association. The Biden campaign announced that it had raised a record-breaking $383m (£294m) in September.

The Democrat was expected to spend much of the day preparing for Thursday, when he and Mr Trump will take part in rival televised town hall-style events.

The candidates have struck different tones on the pandemic, with Mr Trump downplaying its severity and Mr Biden criticising him for not encouraging Americans to wear masks and social distance.

The president said his son had had a mild case of the virus.

“I don’t even think he knew he had it because they’re young and their immune systems are strong and they fight it off.”

He added: “Barron is beautiful and he is free.”

The president cited his son’s recovery as a reason why American schools should reopen as soon as possible, a move opposed by teachers’ unions who fear their members could be infected by students.

He told the crowd: “Barron’s tested positive. Within, like, two seconds it was Barron is just fine now. He’s tested negative, right?

“Because it happens. People have it and it goes. Get the kids back to school.”

After she and the president received their positive results two weeks ago, she said “naturally, my mind went immediately to our son”.

Mrs Trump said it was a “great relief” when Barron initially tested negative, but was concerned he would later test positive for the virus. “My fear came true when he was tested again and it came up positive,” she said, adding that Barron exhibited no symptoms.

“In one way I was glad the three of us went through this at the same time so we could take care of one another and spend time together,” she wrote.

The first lady also reflected on her own diagnosis. She said she experienced a “roller coaster of symptoms”, including body aches, a cough and fatigue.

“I chose to go a more natural route in terms of medicine, opting more for vitamins and healthy food,” she wrote.

In her statement, Mrs Trump also said the “most impactful part” of her recovery was “the opportunity to reflect on many things – family, friendships, my work, and staying true to who you are”.

Mrs Trump said she would be resuming her duties as soon as she could.

His personal doctor said on Sunday that he was no longer a Covid transmission risk to others, and he returned to the campaign trail on Monday, telling supporters he felt “powerful”.

An event at the White House on 26 September, for the unveiling of Mr Trump’s Supreme Court nominee Amy Coney Barrett, was thought to be the root of the localised outbreak of coronavirus.

The White House press secretary, former Trump counsellor Kellyanne Conway and two senators were among the people around the president who tested positive for the virus.

The US has recorded more than 7.8 million coronavirus cases and more than 215,000 deaths – the highest figures of any country in the world.