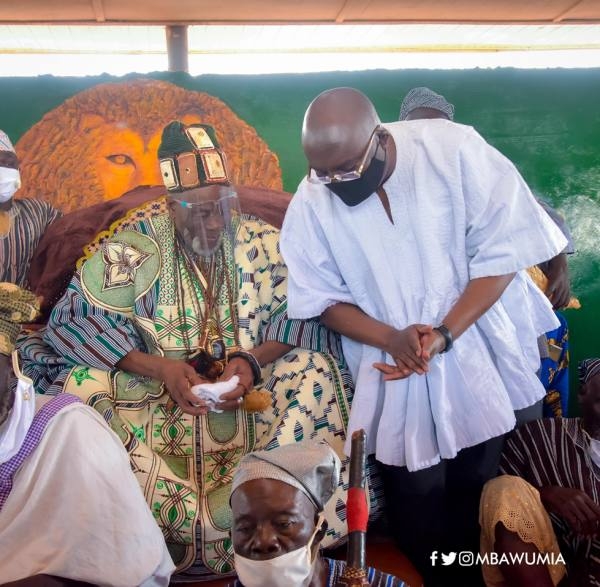 The Overlord of Dagbon, His Majesty Ya Na Abukari II says the Kingdom is grateful to President Nana Akufo-Addo for the immense role he has played in ensuring peace in the Kingdom.

Speaking during a courtesy call on him by Vice President Dr Mahamudu Bawumia at the Gbewaa Palace on Thursday, September 3, 2020, Ya Na Abukari II  expressed profound gratitude to President Akufo-Addo and the government for the wind of peace blowing in the Dagbon Kingdom, as well as his commitment to the development of the area.

“Today is a special day in the life of the people of the North. A moment of pride which reflects the development through which Yendi, and for that matter, Dagbon, has gone through the last three years,” the Ya Na said.

“His Royal Majesty Ndan Ya Na Abukari II, wishes to express his gratitude for the inviable contribution of Dagbon Malti Naa I, His Excellency Nana Addo Dankwa Akufo-Addo, President of the Republic of Ghana and the people for the ensuring peace we enjoy today in Dagbon.”

“I wish to state categorically that the state of Dagbon is being affirmed with each passing day and is a factor of peace and stability in the country.”

The Ya Na continued his commendation of President Akuffo-Addo’s commitment to the progress of Dagbon, by acknowledging his presence during last year’s Damba Festival with a high profile guest, as well as development projects in the area.

“We are also deeply grateful for the commissioning of the Yendi Water Supply Project in July 2020.”

The Ya Na also commended Vice President Bawumia for his efforts at ensuring development in the north.

Addressing the Ya Na and his elders, Vice President Bawumia assured Dagbon and the entire northern regions of President Akufo-Addo’s commitment to ensure more development in the north, especially in the areas of providing critical infrastructure and education.

Apart from countrywide social intervention programs of the government such as Free SHS, One Constituency One Ambulance,  Planting For Food and Jobs, One District One Factory, etc., Dr Bawumia listed a number of development projects the government of President Akuffo-Addo has specifically undertaken in the north and the Yendi Kingdom, as a demonstration of President Akufo-Addo’s sincerity towards the progress of the north.

The Vice President announced that government is in discussion with the University of Development Studies (UDS) to set up a satellite campus in Yendi.

He also announced the government’s decision to convert the Pong Tamale Veterinary College into a  university for agriculture.

The Vice President is on a working visit to the five northern regions of Ghana, where he is expected to meet chiefs and community leaders.

He will also inspect and commission government projects during his tour.