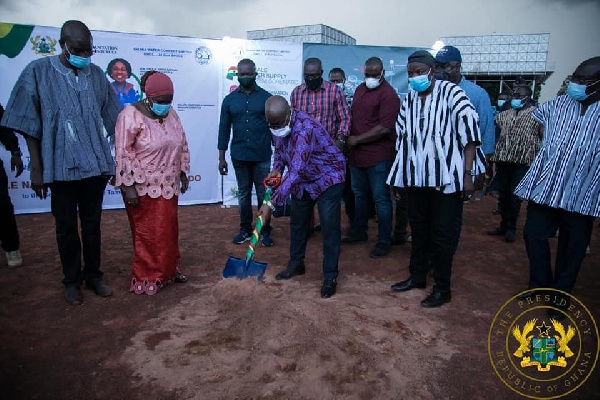 The Savannah Regional National Democratic Congress (NDC) director of communication, Mr Malik  Basintale, has described the sod cutting for the water supply project to the Damongo township and it’s environs by President Nana Addo Dankwa Akufo-Addo as a big scam.

He said the project will not materialise before the end of the year.

Mr Basintale addressing a press conference in Damongo after the Sod cutting on Thursday July 30 recollected that President Akufo-Addo in his visit to the Yagbon- wura’s palace on May 20, 2019, assured the king and his people  that the Damongo water project was to commence in (2019) as everything meant for the project had been secured as approved by his cabinet and the project was to cost $39million.

The Vice President Dr Mahamadu Bawumia who had also visited Damongo sometime earlier according to Mr Basintale, also assured the people the Damongo water project was to commence immediately and was in a tune of $24million.

He said “The contradictions, the wrong timings and the juicy uncoordinated talks proved that they had nothing like the Damongo water project in mind or on their table. What they had was a bucket of lies, always ready to spread it on us whenever we follow up on their promise.”

He went further to  demand a documentation of the Damango Water Supply Project from the government if it truly exist.

“We dare them to show us the contract documents of the Damongo water project agreement, the company in charge, the site plan, the location in Damongo where the project will be situated, the project duration, the amount involved and the day the people of Damongo will see “Ghana water” flow from their taps”.

Describing the Damongo Water project  launched by President Akufo-Addo as a ‘scam’, ‘419’ and ‘Kalabule’ of the highest level in the 21st century, Malik  reiterated that, he can confidently say without any dot of doubt and put his integrity on the line that if the NPP fulfills the Damongo water project as promised before this elections as promised or if by the 1st of December 2020 Ghana water flows through the taps of the people of  Damongo, he  should be banished from entering Damongo by the chiefs and people of our land.

Presdent Akufo-Addo stated while cutting the sod Thursday in Damongo that government secured a credit facility of forty-nine million United States dollars (US$49,000,000.00) from the UK Export Finance and Deutsche Bank AG as the source of funding for the project with the
aim of meeting the water demands for Damongo and its surrounding communities until 2040.