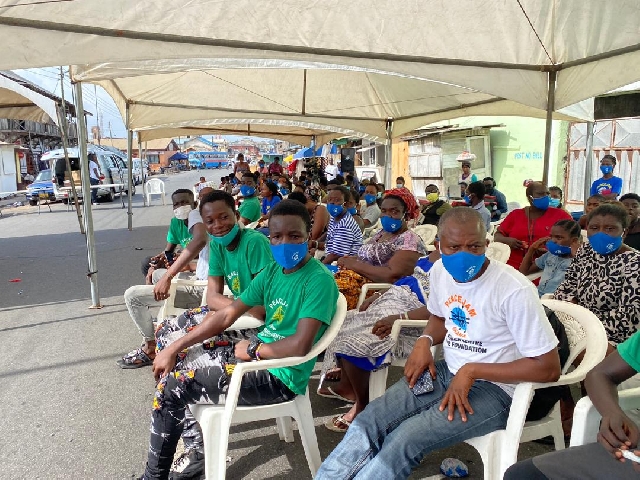 At the town hall peace dialogue

A non-governmental organisation (NGO), West Africa Centre for Peace Foundation, has called on the youth of Odododiodoo Constituency to remain vigilant and not be used as puppets by unscrupulous politicians to foment trouble in the upcoming general elections.

The Foundation made the call on Friday, 20 November 2020 at a town hall peace dialogue it organised on the theme: ‘Don’t Touch My Peace’.

The dialogue was to create awareness among rival political parties on the need to keep the peace in the area and eschew violence.

Chairman of the Foundation, Bismarck Kizito Atorsah, said: “We are here to educate and sensitise the people about the upcoming elections to let them know that you cannot sell your rights to someone simply because they will give you money to either fight or cause mayhem to their advantage”.

“We feel that it is important to let the people know that the time has come for them to define themselves and say: ‘We have a peace, which should not be touched’. If the politicians will play with their lives, they will not toy with theirs”.

The event brought together dozens of youth from the various political parties to dialogue and commit to peace before, during and after the December 7 general elections.

The West Africa Centre for Peace Foundation is a chapter of PEACE JAM Foundation USA, a non-governmental organisation that operates in schools and communities with the sole aim of equipping the youth with the requisite skills of solving problems without resorting to violence.

Odododiodoo has been tagged as one of the hotspots to watch out for in the December 7 polls owing to past clashes between supporters of the governing New Patriotic Party (NPP) and the opposition National Democratic Congress (NDC) in the area.

Last month, a health walk by some NDC youth in the area degenerated into a bloody clash with, at least, one person sustaining gunshot wounds.

Both parties blamed each other for the unfortunate incident.