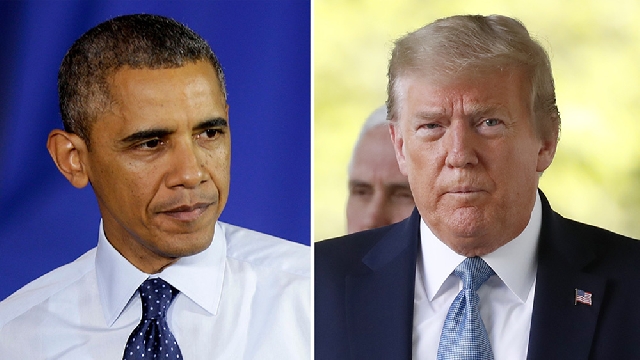 Barack Obama accused Donald Trump of treating the US presidency like “one more reality show”, in a withering speech to the Democratic convention.

The former US president said his Republican successor “hasn’t grown into the job because he can’t”.

At the White House, Mr Trump hit back that he was only elected because of the “horror” Mr Obama left Americans.

On the third night of the Democratic conference, Kamala Harris accepted the vice-presidential nomination.

The grand finale of the four-night convention will see Democratic presidential nominee Joe Biden deliver a speech on Thursday.

The Biden-Harris ticket will challenge President Trump and his Vice-President Mike Pence for the White House in the election on 3 November.

The coronavirus pandemic has forced Democrats to abandon the cheering throngs and razzmatazz that are the hallmarks of the quadrennial party convention in favour of a virtual event of pre-recorded and live speeches.What did Obama say?

On Wednesday night, Mr Obama unleashed possibly his most scathing attack yet about Mr Trump, speaking live from the Museum of the American Revolution in Philadelphia.

“No interest in using the awesome power of his office to help anyone but himself and his friends.

“No interest in treating the presidency as anything but one more reality show that he can use to get the attention he craves.”

He said the consequences of the Trump presidency have been “our worst impulses unleashed, our proud reputation around the world badly diminished, and our democratic institutions threatened like never before”.

The former president lamented “the circus of it all, the meanness and the lies and the conspiracy theories”.

Mr Obama encouraged voters to elect his former vice-president, Mr Biden, in 76 days’ time – praising him as “my friend” and “a brother”.

According to the Associated Press news agency, sources close to Mr Obama say he fully supports Mr Biden, but is concerned about engagement among younger voters and especially voters of colour.

Former US presidents mostly observe a dignified public silence about their successors.

But Mr Obama warned four years ago while still in office that he would regard it as a “personal insult” if Americans elected Mr Trump, then the Republican candidate and a former star of TV’s The Apprentice.

The 44th president has become gradually more outspoken about his successor as he has watched him dismantle his legacy.

On Monday night at the Democratic convention, Michelle Obama delivered an impassioned attack on her husband’s successor, painting him as incompetent and “clearly in over his head”. Her salvo was especially striking to many Americans because US first ladies, serving and former, tend to carefully steer clear of the political fray.How did Trump respond?

During a White House news conference on Wednesday, Mr Trump was asked about his predecessor’s remarks.

“I see the horror that he’s left us and the stupidity of the transactions he made,” the US president said.

“Look at how bad he was, how ineffective a president he was, he was so ineffective, so terrible.

He added: “They did such a bad job that I stand before you as president.”

In a subsequent tweet, Mr Trump said: “Welcome, Barack and Crooked Hillary. See you on the field of battle!”

The president is expected to accept his re-nomination as the Republican candidate from the White House lawn next week during his party’s convention.Who else spoke at the convention?

Speaking from her home in Chappaquiddick, New York, she said: “I wish Donald Trump had been a better president. But, sadly, he is who he is.”

The former first lady and ex-secretary of state added: “For four years, people have said to me, ‘I didn’t realise how dangerous he was.’ ‘I wish I could go back and do it over.’ Or worst, ‘I should have voted.’

“Well, this can’t be another woulda coulda shoulda election.”

She added: “Vote like our lives and livelihoods are on the line, because they are.”