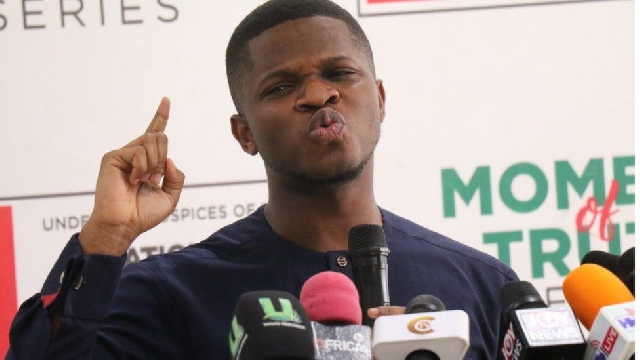 The government of President Akufo-Addo cannot blame the “ever-worsening debt position” of Ghana to the COVID-19 pandemic because the country’s debt situation had already reached unsustainable levels before the virus set in, the main opposition National Democratic Congress (NDC) has argued.

At a press conference in Accra on Wednesday, 28 October 2020, the party’s National Communication Officer, Mr Sammy Gyamfi, said the Akufo-Addo government used the GHS138 billion it has borrowed over the past four years, for “consumption, corruption and wasteful expenditures”.

He said unlike the GHS70 billion borrowed under former President John Mahama that was channeled into tangible infrastructure projects, President Nana Akufo-Addo has nothing to show for all that he has borrowed.

“It is important to make the point, that the attempt by the failed Akufo Addo-government to blame our ever-worsening debt position on COVID-19 is untenable and laughable to say the least.

“This is because, our public debt was already increasing at an alarming rate and had reached unsustainable levels, with a debt to GDP ratio of 63%, even before we were hit by the coronavirus pandemic in March 2020.

“Therefore, the claim by government spokespersons that COVID-19 is what has accounted for our current unsustainable and catastrophic debt situation, is not borne out by the facts”, Mr Gyamfi said.

According to him, “what is even sad and bizarre about the unsustainable and catastrophic debt situation President Akufo-Addo has plunged Ghana, is that this government cannot show any significant or self-financing projects that their unprecedented borrowings have been used for”.

“Unlike President Mahama, who can point to many tangible, significant and in some cases, self-financing projects that he undertook with the about GHS70 billion he added to the public debt during his tenure in office, President Akufo-Addo cannot boast of any significant or self-financing projects he has undertaken with the over GHS138 billion he has added to the country’s Public debt in the last three (3) and half years”, he argued.

“Also, whereas President Mahama can boast of commencing the construction of 123 new Community Day Senior High Schools (E-Blocks), 46 of which he fully completed, President Akufo-Addo cannot boast of a single secondary school he has built since 2017, despite his unprecedented borrowings.

“Worse if it all, is that President Akufo-Addo has abandoned most of the infrastructural projects he inherited from the erstwhile Mahama government to rot.

“Ladies and gentlemen, the reason why President Akufo-Addo has very little show for the unprecedented resource envelope that has accrued to his government is that, he has wasted the chunk of the monies on consumption, corruption and wasteful expenditures.

“His misplaced priorities is what has plunged Ghana into the catastrophic debt situation and economic quagmire we presently find ourselves”, Mr Gyamfi noted.