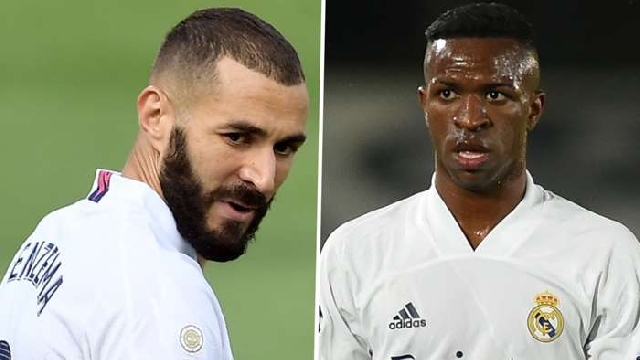 Karim Benzema has been caught telling Real Madrid team-mate Ferland Mendy not to pass to another player on the team during the club’s latest Champions League outing.

Madrid’s poor start to their latest European campaign continued as they were held to a 2-2 draw by Borussia Monchengladbach in Germany on Tuesday night.

The Bundesliga outfit found themselves 2-0 up before the hour mark thanks to a Marcus Thuram double and seemed on their way to a famous victory before Benzema’s acrobatic volley halved the deficit in the 87th minute.

Casemiro then snatched a point for the visitors in stoppage time after turning home a Sergio Ramos header, with Madrid narrowly avoiding a fourth-consecutive European defeat – which would have been a new club record.

Zinedine Zidane’s side were visibly rattled as they went in at half-time 1-0 down, and Benzema was seen criticising someone – reportedly attacking partner Vinicus Jr – while talking to Mendy in the tunnel.

In footage now doing the rounds on social media, the Frenchman can be heard telling his Madrid colleague: “Brother don’t play to him. On my mother’s life. He is playing against us.”

Reports of a dressing room divide had already been circulating in the wake of Madrid’s 3-1 victory over Barcelona at the weekend, with Isco publicly criticising Zidane for restricting his playing time at the start of the new season.

“If he has to take me off, he takes me off in the 50th or 60th minute of the game. Sometimes even at half-time,” the Spanish midfielder told Movistar. “If he has to put me on, he’ll do it in the 80th minute.”

The Blancos missed their chance to build on their Clasico triumph against Monchengladbach, and now have a real fight on their hands to qualify for the Champions League knockout stages.

Zidane’s men lost their Group B opener at home to Shakhtar Donetsk, and after the draw at Borussia-Park, they are sitting bottom of the group – three points behind the Ukrainian outfit.

Madrid will be back in La Liga action on Saturday when Huesca visit, three days before a vital European encounter against Inter at home.