Ed Sheeran: ‘I’d binge eat until I was sick’ 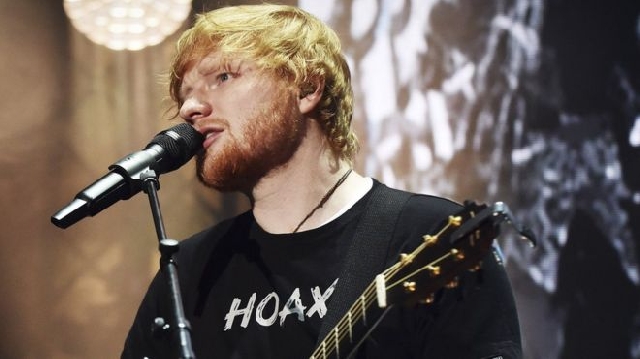 Ed Sheeran has revealed how his “very addictive personality” led him to binge on food and alcohol during the early days of his success.

Speaking at an online summit on anxiety and wellbeing, the star said he had suffered panic attacks and hated the way he looked after becoming famous.

He hit a particularly rough patch during his 2014-15 world tour.

The star said credited his wife, Cherry, and a more healthy lifestyle for helping him turn his life around.

In a wide-ranging interview with documentary maker James Sebastiano, Jr, Sheeran also explained his current hiatus from music, and why he has taken up painting.How touring affected his health

Sheeran said the 180-date world tour to promote his 2014 album X, was his lowest point.

“I would stay up and drink all night and then sleep on the bus,” he said. “The buses would park underneath the arenas and I’d sleep on the bus all day and then wake up and then come out, do the show, drink, get back on the bus and I didn’t see sunlight for maybe four months.

“It’s all fun and games at the start. it’s all rock and roll, and then like it starts getting sad. That was probably like the lowest that I’ve been and I kind of ballooned in weight.”On his addictive personality

“I’m covered in in tattoos and I don’t do things by half,” the star admitted, “so if I’m gonna drink… I see no point in having a glass of wine. I’d rather have two bottles”.

“Having a glass of wine is having something in moderation and probably isn’t going to affect your day the next day. But two bottles of wine probably might make you quite sad.”

But alcohol wasn’t the only problem.

“They used to call me two-dinner Teddy because I used to order two meals and eat that,” he said. “Then you start putting on loads of weight and hating the way you look.

“I think things like sugar, sweet stuff, junk food, cocaine, alcohol, it feels good the more you do, but it’s the worst thing for you.”How Elton John delivered a few home truths

Sheeran was signed to Elton John’s management company at the start of his career – and he said that reading his mentor’s autobiography had prompted a few realisations about his own lifestyle.

“There are so many things that he did that I do,” the star explained.

“He would be like, ‘I would just go on an ice cream binge and eat four desserts until I threw up’, and I was like, ‘I’ve done that before’.

“Or his martini binges, where he sees how many martinis he can drink. And I’m like, ‘I’ve done that before too’.

“With addiction, its very hard to moderate but moderation is the key.”Taking a break from music

Sheeran had a number one album last year, with his No. 6 Collaborations Project, but he indicated he’d be stepping back from music for the rest of 2020.

“You can sense when the public are like, ‘We’ve had enough now,'” he said of the album’s reception. “One of the important things in the industry is to know when not only to give yourself a break, but to give the public a break.”

In the meantime, he’s taken up art.

“I was like, ‘I should probably try and find something else to give me happiness,'” he explained. “There’s only so many movies you can watch and packets of Monster Munch you can eat.

“So I basically bought 30 canvases and I painted a canvas a day for 30 days and it was really fun.”

He said his creations were in the style of abstract impressionist Jackson Pollock – “I just bought house paint and then I would just layer it up by flicking it” – but the public would never get to see them.

“I don’t sell my art. I just love doing it. No one else needs to judge.”On the perils of fame – and how people ‘stole’ his money

One of the star’s more surprising admissions was that he felt very little sense of achievement after his record-breaking run of shows at Wembley Stadium in 2015.

The star says he cherished the early days of his career, playing open mic nights and sleeping on friends’ sofas, more than the big-scale stadium shows and festivals he’s become accustomed to.

“I started at the bottom and I loved every part of it,” he said. “I learned more playing in a room to one person in Exeter when no-one came to my gig in 2009 that I did playing Wembley Stadium for four nights. It’s a weird one.”

He added that fame had come at a cost.

“When you have success and you find money… you get people getting weird with you. I had family members turn weird and friends fall out with me and people stealing. It’s not the key to happiness.

“Fame is an enhancer [of] everyone else’s insecurities,” he added wearily. “The number of people I don’t speak to anymore just because it just turned weird.”

His success has also triggered panic attacks, he said, often when he’s surrounded by large groups of people.

“I would get it on the tube and planes, supermarkets… It’s a weird paranoia in me of assuming that everyone’s going to be horrible, when usually people are nice.”Why he no longer needs social media

Despite taking a sabbatical from releasing music, Sheeran says he’s working on new music – treating his studio sessions as a “nine to five” job, in an effort to maintain a healthy work-life balance and spend more time with his wife.

He’s also quit social media, as he did in 2016 while working on the follow-up to the multi-million selling X album.

“I was on my phone probably 19 hours of the day in 2015 and before that, just constantly just flicking, posting, flicking and posting. And it wasn’t till the tour ended in 2015 where I was like, ‘Oh I’m just gonna try and live without my phone for a bit’.

“I had 1,500 contacts on my phone and people were texting the whole time and it just felt a lot of responsibility to either reply or meet up with them.

“For the first month I felt like a massive weight had been lifted.”

After returning to social media to promote his third album, Divide, he found himself falling back into bad habits, so he announced he’d be “taking a breather” again on Christmas Eve 2019.

He now says he’s “of an age where I’m beyond” needing to be on social media.

“I don’t think I’m going to get the youth [audience] back – because I’m getting into my 30s,” he explained. “It’s not like 16-year-old people are going to relate to me next time I release an album. So it’s not like I need to be on it any more. I can just have someone post it [for me].”