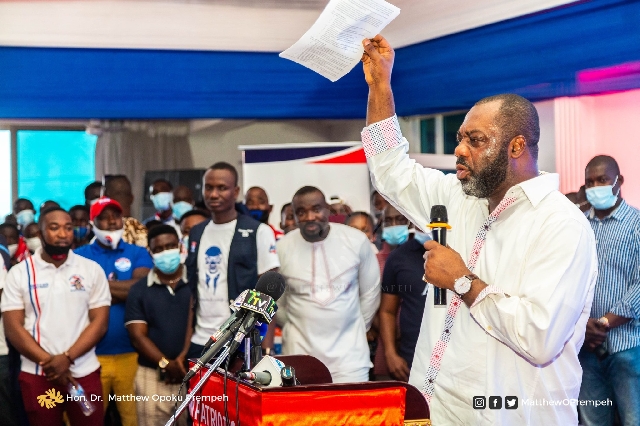 Education Minister Dr Mathew Opoku Prempeh, popularly known as Napo, has charged the youth of the governing New Patriotic Party (NPP) to lead the 2020 campaign to retain the party in power after the December polls.

Addressing the youth at the official inauguration of the Ashanti Regional NPP Youth Wing’s 2020 Election Campaign Team at the Georgia Hotel in Kumasi on Saturday, Dr Prempeh stated emphatically that the youth wing is the heartbeat of the NPP, therefore the party is counting heavily on them to lead the campaign and help retain power for the NPP to continue with its “extraordinary works.”

He further urged the NPP youth wing to strictly adhere to the COVID-19 health protocols by starting a vigorous house-to-house campaign so that the victory 2020 target will be achieved for the party to implement more youth-centred programmes to improve their lives.

Also, he warned Ghanaians that former President John Mahama and his National Democratic Congress (NDC) “failed woefully in political office, therefore, the electorate should reject the NDC to help protect the massive developmental gains secured under the NPP administration in less than four years.”

For his part, the NPP’s National Youth Organiser, Henry Nana Boakye, aka ‘Nana B’, stressed that the NPP is the only suitable political party to manage the affairs of the country.