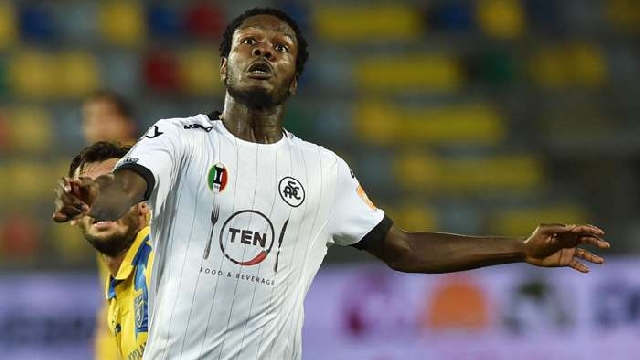 The Italian-Ghanaian forward played his part in giving the Little Eagles a historic victory Emmanuel Gyasi had a hand in a goal with newly-promoted Spezia securing their maiden Serie A win away to Udinese on Wednesday, however doing it with 10 men.

The Little Eagles secured top-flight promotion after seeing off Chievo Verona and Frosinone in the Serie B promotion-playoffs last season having finished third during the regular campaign. It wasn’t a good first league outing for the Liguria side as they suffered a 4-1 loss to Sassuolo on Sunday.

The situation was however different for Spezia on Wednesday and they were very pumped up to correct their wrongs against Sassuolo, getting the ball into the back of the net in just the second minute of play at the Stadio Friuli via Matteo Ricci. His effort was however ruled out for offside by the Video Assistant Referee.

They were however not going to be denied in the 29th minute with Andrey Galabinov giving them the lead after heading in Gyasi’s cross.

Spezia held on to that lead until the fourth minute of the 90 when Galabinov completed his brace with an easy finish free of any challenge that was assisted by goalkeeper Rafael’s kick.

Before that, Vincenzo Italiano’s side had Claudio Terzi sent off in the 66th minute for a second bookable offence but the incident clearly did not deter them from bagging their historic win in the Italian top-flight.

Gyasi had played 90 minutes in the season opener against Sassuolo but lasted 68 minutes at the Friuli, producing 26 touches, 15 accurate passes from 16 (94%), one key pass, a successful cross and successful long ball, before going off for Martin Erlic.

Gyasi who holds a Ghanaian and Italian passport, has been at Spezia since 2016 when he joined from Pistoiese. He has had a hand in 25 goals (13 goals, 12 assists) in 75 appearances for them since then.

For Udinese, it marks back-to-back defeats after an opening day loss to Hellas Verona. This has happened without Nigerian defender William Troost-Ekong who was officially announced as a Watford player on Tuesday after penning a five-year contract with the Hertfordshire outfit.

Gyasi will meanwhile hope to inspire Spezia when they travel to the San Siro on Sunday to face an in-form AC Milan.