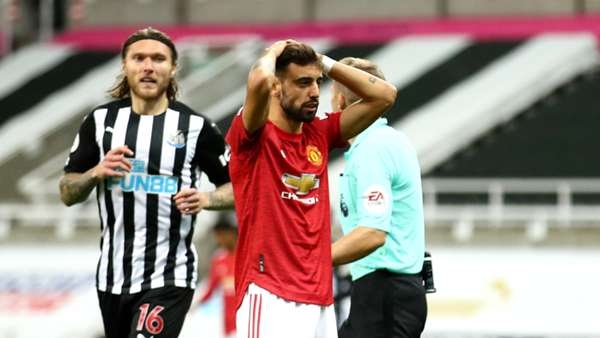 The Portugal international boasts an impressive record from 12 yards, but saw his latest effort kept out by Magpies goalkeeper Karl Darlow   Bruno Fernandes has vowed to make amends for the first missed penalty of his Manchester United career when the Red Devils are next presented with an opportunity to convert from the spot. Ole Gunnar Solskjaer’s side have had plenty of practice from 12 yards in recent times.

Portugal international Fernandes has been their go-to man in that department, with the 26-year-old boasting an impressive record when embracing individual pressure.

He had been faultless for the club heading into an outing against Newcastle, but suffered a rare fluffing of his lines against the Magpies as Karl Darlow achieved what few before him have managed by keeping out a penalty from Fernandes.

The former Sporting CP star did make amends for that miss by sparking a late flurry of goals from United that guided them to a 4-1 win, but he is eager to right a personal wrong.

He will not be hiding away the next time a match official points to the spot, with a talismanic part of Solskjaer’s plans keen to retain the responsibility he embraced when arriving in English football.

Fernandes told MUTV of his future penalty plans, having seen a run of 10 successes for the Red Devils brought to a close: “I’m human, it happens.

“The keeper did well, I didn’t do the right things. I studied the keeper but I didn’t shoot the ball the way I want, but the keeper deserves credit.

“I need to do much better on the penalty and the next one I will do for sure.”

Fernandes has converted 30 of the 33 penalties he has taken in his career to date and, prior to being denied by Darlow, his last failure from the spot had come back in October 2018 while still on the books at Sporting.

Given United’s recent record on the penalty front, he should expect to get an opportunity to put things right at some stage in the near future.

The Red Devils will be back in action on Tuesday when opening their Champions League campaign away at Paris Saint-Germain, while their next Premier League outing is set to see them play host to Chelsea.