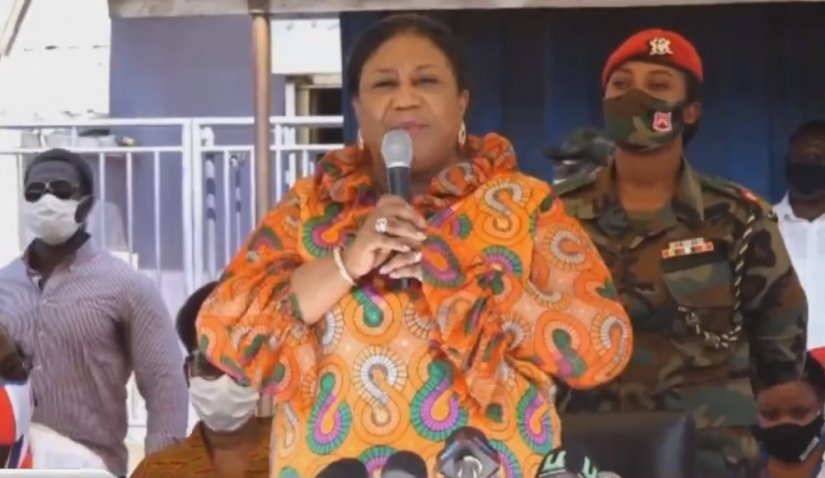 She visited and interacted with the chiefs of Achimota and Akweteman, as well as traders at the Achimota and Lapaz Markets, appealing to them to vote massively to retain the Government in power in the December 7 elections, so it could continue with its developmental agenda.

The First Lady said the New Patriotic Party- led government had done a lot of work within the past three and a half years and, thus, deserved another term in office.

“The President is doing all the work he promised to do one by one, which include free SHS, the restoration of teacher trainee and nurses’ allowance, and ending of dumsor and so he and the NPP deserve four more years to continue the good works for all Ghanaians,” she said.

She, however, explained that her visit was to interact to know the current challenges of the electorate so she could inform the President to find a solution to them.

The Rebecca Foundation, she said, was also complementing government efforts by supporting health care delivery, provision of mentorship and skills training for both in and out of school girls, and women empowerment, among others.

Nii Ayibonte Adams, Chief of Achimota, and Nii Nmai Akwetey Brenya III, Akweteman Mantse, welcomed the First Lady to the Constituency and wished her Party well in the upcoming elections.

Nii Brenya appealed for a footbridge to be built on the N1 Highway, specifically between Akweteman and Apenkwa, to put a stop to the frequent pedestrian knockdowns on that stretch as they tried to cross.

Both chiefs also appealed to the Government to focus on the construction of their community link-roads, especially the bypass from the Old Station to Akweteman, which is untarred and posed health hazards to the residents due to the dust.

The First Lady was accompanied on the tour by Mr Fuseini Issah, the Member of Parliament for Okaikwei North, and Mr Boye Laryea, the Municipal Chief Executive, as well as other NPP officials, who were cheered and applauded by the community members gathered on streets to hail her arrival among shouts like “Four more for Nana.”