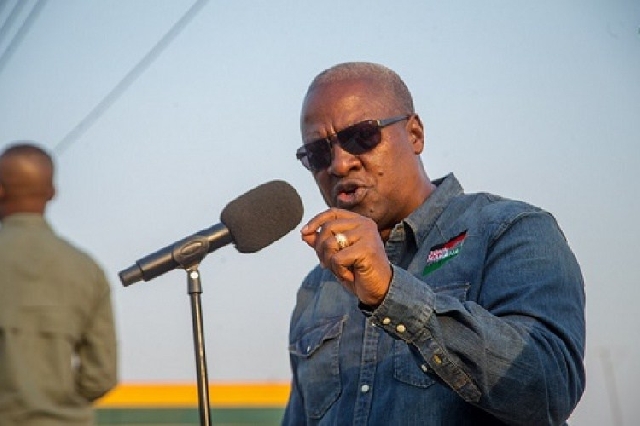 Former President John Mahama has said President Nana Akufo-Addo should have applied common sense and planning in implementing the Free Senior High School programme, which would have avoided the needed for a double-track system.

Mr Mahama, who has promised to scrap the double-track system should he win the 7 December 2020 polls, told party supporters at Jirapa in the Upper West Region during his recent tour.

The flagbearer of the National Democratic Congress (NDC) said upon assumption of office next year if he wins the polls, he will prioritise the completion of the 200 community day schools his last administration started, so as to conveniently absorb all the SHS students at a go without running a double-track system.

“We were building an E-block at Kojokala and it was not the only one … and I’ve always said that government is common sense and planning”, Mr Mahama said, adding: “If you know you’re going to implement a policy, you must look at all the ramifications of the policy and it was easy to see”.

He said: “We started free senior high school education, I announced it in Parliament in 2015 and we started in 2015 with day students.

“We cancelled all school fees for children who were day students in senior high school and in 2016, we enrolled 140,000 boarding students on the bursary system but we knew that with the implementation of free SHS, there was going to be an increase in the number of children coming to secondary school and, so, from 2015, we started an aggressive policy of increasing and expanding the infrastructure in the existing secondary schools but we realised that however much we expanded the infrastructure, the children were going to overwhelm the existing secondary schools”, the former President said.

“So, we said: ‘OK, let’s build 200 new secondary schools so that all the children can have access to secondary school education’, and that is why we started all these community day schools.

“And if the Nana Akufo-Addo administration used planning and common sense, then what they should have done was to take the 200 new community day schools and fast-track and finish them so that we will not have the double-track that we are currently going through”, Mr Mahama said.

In his estimation, the Akufo-Addo administration’s failure to plan and use common sense in rolling out the Free SHS policy, has compromised the quality of the implementation.

“So, they abandoned all the projects, they declared free SHS; within three years, the numbers of the children increased, there were no facilities, in some schools the classroom blocks are not enough, in others no dormitories, no administration block, no dining halls and, so, you find the children sitting under trees and eating their food, meals under trees.

“And, so, I have said and I’ll say again that the problem with the free SHS is the poor implementation by the Nana Akufo-Addo administration.

“It’s a very good policy, it was anticipated, it was put in our Constitution but in their rush to implement it in order to take political credit, they have implemented it poorly”, Mr Mahama argued.

He said: “Recently, Ghana’s Free SHS was declared one of the most expensive free SHSs in the world but we can implement it more efficiently so that we remove the challenges that the parents, the teachers and the students face”.

“And one of the first priorities that I have is to end the double-track and that is why when I become President again, I will fast-track the completion of all the community day schools that we were building…” he promised.