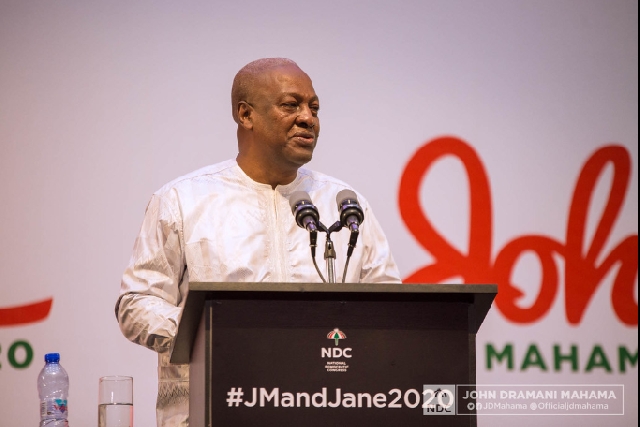 The flagbearer of the National Democratic Congress (NDC), Mr John Dramani Mahama, has said he will, within one year in office, eliminate the double-track system that has plagued the smooth implementation of the free SHS Programme.

You’re all that matters to me!
You take pride in our agriculture and you want to see the sector fully developed and provide opportunities for all, especially our youth. This is why the next NDC government will promote agri-business, introduce farmer service centres and digitalize agriculture as a game-changer to boost productivity and profitability. Digital technologies can help farmers to work more precisely, efficiently and sustainably.
I guarantee you this will be done!

To achieve his target, the former President said his next government, should he win the 7 December polls, will embark on a fast-track programme to complete the abandoned Community Day Schools, expand infrastructure in existing schools, and include private schools in the free SHS programme.

Addressing a community durbar of chiefs and farmers at Fawohoyeden in the Asunafo North district of the Ahafo Region, Mr Mahama said he has always stood for quality free SHS.

According to him, claims that he would cancel the free SHS programme is false, noting that he started the programme with day students during his administration.

While acknowledging that Ghana during the NDC era was not heaven, President Mahama maintained that the NDC has a better record than the NPP, explaining that today, everyone is suffering and can hardly make ends meet.

Jobs & Prosperity for all.
I join those who continue to demand of President Akufo-Addo to demonstrate to us, Ghanaians, what he did with the over GHC140 billion he borrowed in less than four years.

“These days nothing works. Whether as a farmer, trader, driver or mechanic, the hardship is unbearable everywhere,” he bemoaned, adding “we have to go back for the NDC and I know that by God’s grace, we shall be victorious.”

He announced to the farming community that when he wins the December 2020 elections, his government will reintroduce the free cocoa fertiliser intervention that was aborted by the NPP, to bring relief to cocoa farmers.

He also outlined a number of policies contained in the NDC 2020 People’s Manifesto, including the Free Primary Health Care Plan, Free Technical and Vocational Education and Training (TVET) and the Free Apprenticeship Programme.

Furthermore, he said for a President who cancelled the allowances for teacher and nurse trainees as well as that of Arabic teachers while in office, the flagbearer of the biggest opposition party will surely cancel the free SHS initiative should he win the 7 December 2020 polls.

“We [NPP] are a government that is thinking about the people, the poverty of our people and to bring in policies that will uplift our people from poverty”, Dr Bawumia told the people of Saboba in the Northern Region where he has been touring.