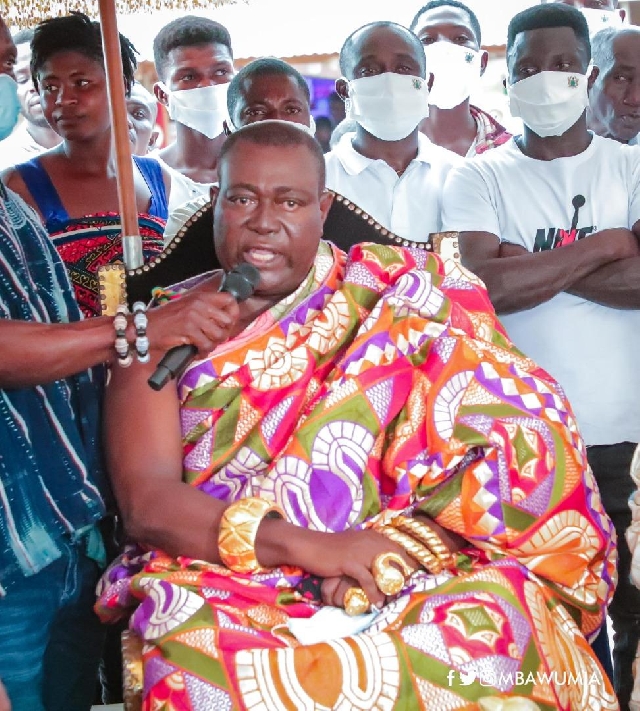 Chiefs in the Tain Traditional Area have hailed the significant impact President Akufo-Addo’s flagship educational intervention, Free SHS, is having on their community.

At a durbur of chiefs on Thursday, 24 September 2020 in Nsawkaw, the chiefs said Free SHS has made it possible for their children to access secondary education.

“The people of Tain are so grateful for your Free SHS.

“Today, most of our people are getting free education and that will help us,” said Daasebre Okogyeaman Duodu Ampem III, Nsawkaw chief, who spoke on behalf of the Tain chiefs.

The chiefs said as a poor and marginalised communuty, the Free SHS policy will help transform the community.

“It will help to change the socio-economic structure of our district,” Daasebre Okogyeaman said.

While commending the government of President Akufo-Addo for its educational intervention, the chiefs urged the government to continue to do more to bridge the gap in social differences in the country, especially in their community.

“We are part of the marginalised; very poor, low income.

“So then, every effort that the government will undertake to help us is very critical.”

“Your programs should be geared towards alleviating poverty in communities like Tain.”

The chiefs acknowledged government’s ongoing project of building a cashew factory in the area, and also appealed to government to have a second look at the pricing of cashew to help cashew farmers in the area.

“We grow cashew and we know there is an attempt to build a cashew factory for us; it is in the process and we are waiting for it.”

“We also want you to do something about cashew prices because the cashew farmers are complaining of the pricing.”

Prior to Dr. Bawumia’s visit to Nsawkaw, he had earlier in the day visited Bongaase in the Damba Constituency, where chiefs there also spoke about the welfare of cashew farmers.

The Vice President spoke extensively on government’s plan to prioritise the cultivation and processing of cashew, and other crops.

He said the Tree Crops Development Authority Bill has been passed by Parliament, and the Authority will supervise the activities of cashew farming and other crops, just as the Cocoa Marketing Board does for Cocoa.

On pricing, the Vice President said the Tree Crops Development Authority will be the exclusive government agency to manage Cashew pricing, as well as conduct research into cashew production and other tree crops.