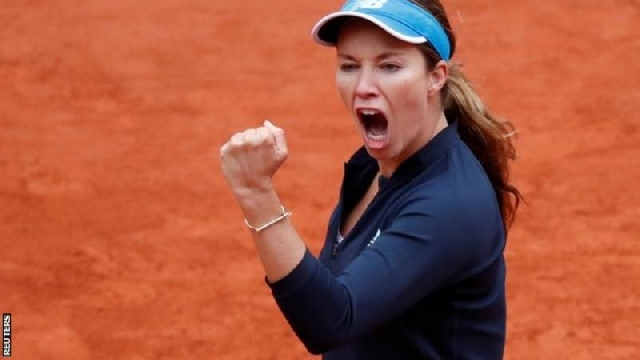 American Danielle Collins booked the final spot in the French Open women’s quarter-finals with victory over Ons Jabeur in their rain-delayed encounter.

The pair had been scheduled to play on Monday and did emerge for a warm-up and coin toss after waiting for several hours because of bad weather, only for the match to be called off.

They returned in much better conditions on Tuesday, with Collins triumphing 6-4 4-6 6-4 over the Tunisian 30th seed.

She will face Sofia Kenin on Wednesday.

Collins has won all three of her previous matches against compatriot Kenin, who is the Australian Open champion and the fourth seed at Roland Garros.

Collins had led by a set and a break against fellow 26-year-old Jabeur before the Tunisian fought back by winning five games in a row on her way to taking the second set and forcing a decider.

But when Jabeur double-faulted for the first time to hand Collins match point and then sent a forehand into the net, the American lay down on the Philippe Chatrier clay in delight and relief.

“I felt like I was in the driver’s seat until 6-4 3-0, but she’s tricky and she served really well and she hit drop shots that I hadn’t expected,” she said.

“I just had to dig it out. I lost my way there a bit, I just needed to stay positive.”